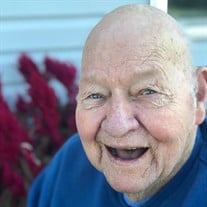 Staff Sgt. Kenneth “Kenny” Franklin Batson, 86, of Mooresville, NC, passed away Thursday, January 28, 2021. He was born on February 3, 1934 in Goldsboro, NC to the late Lewis and Lila Batson. He joined the United States Army as a young man, and spent the next 20 years proudly serving his country in places like South Korea and Vietnam, as well as many other posts that included a host of bases located in the United States, namely GA, CA, MD, AZ (twice), NC (twice) and spent three years each stationed in Germany and England. He met his soul mate, Hui Uk “Tammy” Batson, while stationed in Tajon City South Korea at a base near the DMZ. She became Mrs. Kenneth F. Batson on May 21s​ t​, 1962. They were married in both a traditional Korean wedding and an American ceremony performed by the U.S. consulate. They retired in Jacksonville, NC where they lived for 45 years after which they moved into his younger daughter, Elizabeth Krajnik’s home in Mooresville, NC in April of 2014 where they lived for the duration of their lives. Kenny enjoyed relaxing with friends and loved fishing and, most of all, spending time with family. In addition to his parents, Kenny is predeceased by his wife, Hui Uk Batson; son, Johnny Batson, grandson, Buddy Batson; and brother William Batson. Kenny is survived by his daughters Vicky Poutas (John) of Margate, FL, Elizabeth Krajnik (Mark) of Mooresville, NC, sons Franklin Batson (Gail), and Jeffrey Batson (Loretta) of Jacksonville, NC; sister Gloria Batson; six grandchildren, five great grandchildren, and two great-great grandchildren. The interment will be at Coastal Carolina State Veteran’s Cemetery in Jacksonville, NC. The memorial service will take place at a future date. In lieu of flowers, memorial contributions may be made to ​Richard’s Coffee Shop​, in Mooresville, NC. He will be missed.

The family of Kenneth Batson created this Life Tributes page to make it easy to share your memories.

Send flowers to the Batson family.