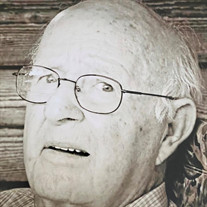 Kermit Buddy Robbins, of Cornelius, her husband of 73 years, her Daddy, their Poppie/Pal and a true friend to many, saw the precious face of our Lord and Savior on December 26, 2020. His family is so thankful that when Buddy closed his beautiful blue eyes for the last time, and breathed his next eternal breath, his eyes were met with the eyes of his heavenly Father saying "welcome home my good and faithful servant." Born on December 31, 1924, Buddy graduated from Cornelius High School after attending all eleven years without missing one day. This attribute, and character of this man, followed him the rest of his life. In everything he did, both personal and professional, he showed true dedication. After high school he worked briefly at the old Mooresville Mills before joining the United States Army where he served at the 188th General Hospital in the European Theater. Buddy was a proud medic/x-ray technician. He was awarded several medals while in the Army which included American Theater Service Medal, EAME Service Medal, Good Conduct Medal and the World War II Survivor Medal. Buddy had hoped to attend Duke University, but with the end of World War II and the numerous soldiers returning home, the waiting list was too long. Buddy, having an easy spirit, attended Kings Business College in Charlotte. He always made the best of what he was given and was grateful. When Buddy returned home, he married Merle Mayhew and began another chapter in his life of dedication to his wife, and service to his communities, both Davidson and Cornelius. The nature of this man can be seen through the eyes of his bride that he loved like Christ loves the Church. Buddy was a volunteer fireman with the Town of Davidson for over 25 years; he served as a member of the Lions, Kiwanis and Rotary Clubs. Buddy was a Mason at the Cornelius Lodge and a life long member of Woodmen of the World. Buddy personified dedication. He was the oldest member of Cornelius Presbyterian Church which his father, Walt Robbins, helped build. He served there as Deacon, Elder and Sunday School Superintendent for many years. Buddy was also instrumental in preserving the home place of the Robbins family now known as "Robbins Park." After graduation, Buddy began his career at Lance Packaging Company and retired after 20 years. Buddy then began a second career at Davidson College in the Athletic Department and retired after 25 years. He loved his job at Davidson working with students, coaches and administration, and for the rest of his life kept in touch with a few of the students. Buddy was at Davidson when the announcement was made that the college was going "coed." (This was a little challenging to accommodate female athletes, but he and his team were up for the challenge and the female athletes were welcomed and accommodations were completed on time!) Buddy lived his life in a humble manner. He will certainly be missed by his friends and his extended families at Food Lion and CVS, which he sometimes visited several times a week. Buddy is survived by his wife, Merle; daughter, Pam (Robin) Robinette; grandchildren, Heath and Haleigh Lipford and Stacey (Brian) Burge and four grandchildren, Luke and Noah Lipford, and Madison and Ty Burge. Buddy is also survived by nephew, Carl Robbins (Pam); nieces, Sarah Collins (Ed) and Mary Claire Robbins; and nephew, George Camp and great-nephew, Joshua Camp. Buddy was a kind and gentle man, and certainly his "dash" between birth and death will remain in the hearts of his family and all who were blessed to know him. The Robbins family extends a special thank you to his caregivers. In lieu of flowers, memorials may be made to Rock Spring Campground, PO Box 204, Denver, NC 28037 or Cornelius Presbyterian Church, PO Box 279, Cornelius, NC 28031. A funeral service will be held at 2 PM Wednesday, December 30, at Cornelius Presbyterian Church, with burial following at Bethel Presbyterian Church. Visitation will follow at the cemetery. James Funeral Home of Huntersville is serving the family.

Kermit Buddy Robbins, of Cornelius, her husband of 73 years, her Daddy, their Poppie/Pal and a true friend to many, saw the precious face of our Lord and Savior on December 26, 2020. His family is so thankful that when Buddy closed his beautiful... View Obituary & Service Information

The family of Kermit Buddy Robbins created this Life Tributes page to make it easy to share your memories.

Kermit Buddy Robbins, of Cornelius, her husband of 73 years,...

Send flowers to the Robbins family.