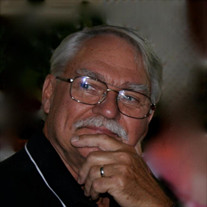 Larry Douglas DeMontegre of Huntersville, NC, passed away Saturday, March 13, 2021 at 78 years of age. Larry was born in California, but grew up in Medford, OR. After spending 4 years in the Navy, he moved to South Carolina to attend Bob Jones University where he met his wife, Lois. He went on to get a Masters’ degree in Secondary Education/Administration from the University of South Carolina and an Ed Specialists’ Degree from South Carolina State College. He worked in Winnsboro and Richland School District 2 public schools in South Carolina as a teacher and an administrator. His love for young people and teaching brought him local, state, and national recognition as an exceptional teacher. After retiring from the South Carolina school system, Larry and Lois taught in International schools in Seoul, Korea and Valencia, Venezuela. However, the birth of their first grandchild, brought them back to the United States where they taught in North Carolina. Larry was devoted to his family and would drop everything to spend time with his children and grandchildren. He loved his friends and would not pass up an opportunity to speak to a neighbor, or to a stranger. In retirement, his passion was working on antique cars, especially his beloved ’59 corvette. He was a member of several antique car clubs, donating his time for charity shows and working as a club officer. He enjoyed traveling and took several extended trips overseas, driving through foreign countrysides. It was important to him to make a difference in people’s lives. He showed Christian love by trying to make life easier for others and was known for his kindness and generosity. Larry is survived by his wife of 52 years, Lois DeMontegre and their children and children-in-law: Carrie and John Hemmings of Montgomery, Al; Amy and David Gabler of Cornelius, NC; and Larry Matthew and Magnolia DeMontegre of Bend, OR; grandchildren: Jake, Lauren, and Caroline Hemmings of Montgomery, AL; Ella and Meghan Gabler of Cornelius, NC; Orion, Odinn and Aurelia DeMontegre of Bend, OR. A Memorial/Celebration of Life service is planned for early summer and will be announced at a later date. In lieu of flowers, memorial contributions may be made to Save the Children at www.savethechildren.org or FeedNC at 275 Broad St. Mooresville, NC 28115 (www.feednc.org) Online condolences may be made at www.jamesfuneralhomelkn.com.

Larry Douglas DeMontegre of Huntersville, NC, passed away Saturday, March 13, 2021 at 78 years of age. Larry was born in California, but grew up in Medford, OR. After spending 4 years in the Navy, he moved to South Carolina to attend Bob Jones... View Obituary & Service Information

The family of Larry DeMontegre created this Life Tributes page to make it easy to share your memories.

Send flowers to the DeMontegre family.