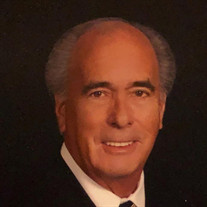 Larry Harold Maye, 75, of Huntersville, passed away suddenly on April 23 while sitting on his patio, enjoying the blooming azaleas that he and his wife had planted over many years. He was born April 4, 1946 to Harold and Alice Maye in Charlotte, NC. After graduating from Garinger High School, he continued his education at Catawba College where he also played baseball. Larry then became a salesman for Maye Hosiery Sales and later took over the business after his father retired. Playing sports was one of the delights of Larry’s life. In high school, he played on one of the many acclaimed Post 9 teams of the 60s who went to the American Legion World Series in Louisville, KY. There his team finished second after losing to the strong pitching arm of soon-to-be major leaguer Rollie Fingers. Later, Larry played on elite fast-pitch softball teams that travelled throughout the Southeast. In his 20s, golf became Larry’s game. It was a rare week, indeed, if he did not play a round or two. Not only did he become a good player of the game, itself, with a 4.3 handicap at age 75; but he became knowledgeable about its equipment. If someone asked him to recommend clubs or balls, Larry would often deliver a dissertation in response! Above all, however, Larry’s kind, gentle, friendly spirit characterized him best. He enjoyed the company of others and never passed up a time of lengthy conversation. Larry was preceded in death by his parents and his beloved son, Dowd Maye. Survivors include his wife of nearly 50 years, Diane Neil Maye; daughter-in-law, Kara Tietsort Maye; brother, Jerry Maye and wife Rita; sister, Penny Frazier and husband, Al; sister-in-law, Sally Gaston and husband Eddie; brother-in-law, Walt Neil and wife Nancy; and sister-in-law, Delia Neil. He also leaves behind many nieces and nephews who enjoyed their engaging and affable uncle. A private family service to praise God and celebrate Larry’s life will be held Saturday, May 1, at 11 am, First Presbyterian Church in Charlotte. Friends are invited to join in worship via livestream: //www.firstpres-charlotte.org/funerals/. Memorials may be made to First Presbyterian Church, 200 W. Trade St., Charlotte, NC 28202. James Funeral Home of Huntersville is serving the family.

Larry Harold Maye, 75, of Huntersville, passed away suddenly on April 23 while sitting on his patio, enjoying the blooming azaleas that he and his wife had planted over many years. He was born April 4, 1946 to Harold and Alice Maye in Charlotte,... View Obituary & Service Information

The family of Larry Maye created this Life Tributes page to make it easy to share your memories.

Send flowers to the Maye family.