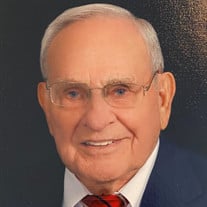 Leonard Ray Knox (86) of Davidson NC died on September 28, 2021 peacefully at his home. Ray was born on October 17, 1934 in Davidson NC to the late Ralph and Annie Barkley Knox. A 1953 graduate of North Mecklenburg High, he proudly served in the Army during the Korean War. Upon returning home, he met and married his wife Frances Chapman and moved to Chapel Hill. He often expressed his appreciation for the GI bill that afforded him the chance to graduate from UNC, and he was a passionate Tar Heel fan. Ray’s career in human resources included roles at General Time, Burlington Industries and Westinghouse, where he retired after 26 years of service. From serving on the board of the Arrowood Business Association, to coaching baseball in the Starclaire Athletic Association, he enjoyed connecting with his community and could strike up a conversation with anyone, anywhere. Ray was a life-long member of Bethel Presbyterian Church, where he served as elder and deacon. He enjoyed many hours in his garden and volunteering for Habitat for Humanity. His greatest joy was found being with his family – attending events of his children, grandchildren, nieces, nephews, and connecting with his vast extended Knox family. He is survived by Frances, his devoted wife of 63 years, and sons Gary (Sharon) Knox and Steve (Paige) Knox and daughter Karen (Chip) Fesperman; Brother Eddie (Frances) Knox and sisters in law Lib Knox, Montye Knox; sister in law Becky (Richard) Wilson; seven grandchildren Tabitha (Jeff), Olivia (Logan), Tiffany, Chandler (Ally), Kenzie (Jake), Jay, and Rebecca; eight great grandchildren; and a large extended family of nieces, nephews and cousins. The family would like to thank Laura, Angie, Carrie and Lisa for their continued compassionate care. A service will be held on Friday, October 8 at 2:00 pm at Bethel Presbyterian Church in Cornelius, NC. Burial will follow in the church cemetery. A reception will follow services in the Family Life Center. In lieu of flowers, memorials may be made to Bethel Presbyterian Church, 19920 Bethel Church Rd. Cornelius, NC 28031. James Funeral Home of Huntersville is serving the family.

Leonard Ray Knox (86) of Davidson NC died on September 28, 2021 peacefully at his home. Ray was born on October 17, 1934 in Davidson NC to the late Ralph and Annie Barkley Knox. A 1953 graduate of North Mecklenburg High, he proudly served in... View Obituary & Service Information

The family of Leonard Ray Knox created this Life Tributes page to make it easy to share your memories.

Send flowers to the Knox family.