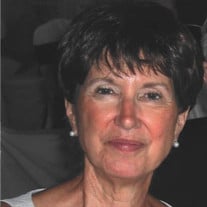 Margaret “Peggy” Louise Blecka died on August 4, 2020, after a lengthy illness. Peggy was born in Chicago on January 8, 1946, to Margaret R. and Stephen L. Hornyak. She graduated from Longwood Academy in Chicago, and earned bachelor’s and master’s degrees in special education from Northern Illinois University and Southern Illinois University, respectively. She worked in the field of special education as a dedicated teacher and resource facilitator in Illinois, Missouri, and California. Peggy met her husband Lawrence “Larry” while attending NIU, and they were married in 1969. Peggy and Larry celebrated their 50th wedding anniversary on August 9, 2019. They raised two daughters, Juliann Margaret Leer of Huntersville, North Carolina and Kathryn Marie Blecka of Novato, California. Peggy was a devoted wife, mother, and grandmother. Peggy spent childhood summers with family at her grandparent’s home in Edgerton, Wisconsin, and then many happy days with her husband and daughters on Lake Geneva, Wisconsin. Peggy was an active member of Chi Omega Sorority and enjoyed lifelong friendships with sorority sisters. Peggy and Larry enjoyed preparing meals for special occasions while hosting family and friends. They loved traveling to far away places as well as exploring their home state of North Carolina where they moved in 2012 after retirement. Peggy was preceded in death by her beloved husband Larry, in March of 2020 and parents Margaret and Stephen, and brother in law Ken Hefty. She is survived by her two daughters; Julie Leer (Dan) and Katie Blecka, grandson Dylan Leer, sisters; Mary Kay Hefty and Juleann Randles (Jack), brother in law Gregory Blecka (Marie), sisters in law; Audrey Reardon (Rich) and Debbie Czahor (Bill), as well as many nieces and nephews. A memorial mass will be celebrated in the summer of 2021 at St. Constance Catholic Church in Chicago, Illinois with interment at St. Adalbert Cemetery, Niles, Illinois. In lieu of flowers, donations may be made to the Michael J. Fox Foundation for Parkinson’s Research at www.michaeljfox.org/donate, or to the Aldersgate Hero Fund (for the direct benefit of Aldersgate healthcare workers on duty during the Covid-19 crisis) aldersgateuniversity.com/HeroFund. A special thank you to the healthcare workers at Cuthbertson Village, Aldersgate for the love and dedication they provided to Peggy. James Funeral Home of Huntersville, NC is assisting the family, online condolences at www.jamesfuneralhomelkn.com.

Margaret &#8220;Peggy&#8221; Louise Blecka died on August 4, 2020, after a lengthy illness. Peggy was born in Chicago on January 8, 1946, to Margaret R. and Stephen L. Hornyak. She graduated from Longwood Academy in Chicago, and earned bachelor&#8217;s... View Obituary & Service Information

The family of Margaret Blecka created this Life Tributes page to make it easy to share your memories.

Send flowers to the Blecka family.