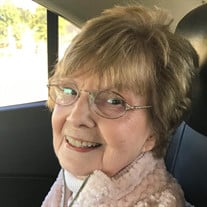 Margaret E. Teeter, 88, of Charlotte, NC passed away Monday, April 12, 2021, at her home surrounded by her loving family. “Marge” as she was known by friends and family, was born May 28, 1932 in Ithaca, a daughter of the late Ralph E. and Lena M. Garvin. Marge was a graduate of Ithaca High School. She retired from the First National Bank of Moravia (Et al.) in 1997, after many years of dedicated service. While growing up in Ithaca, she enjoyed daydreaming on long walks through state parks that surrounded her home. She later settled in Moravia, NY, where she raised her three children and spent most of her life, until moving to Charlotte, NC in 2016 to live with her daughter, Maria. While in Moravia, Marge made her singing debut with the Moravia Community Theatre. She was well known for her lead roles in the musicals, “Oklahoma,” “The Sound of Music,” “Brigadoon,” “Showboat,” and “Camelot.” Her singing talents were also blended with the sounds of the Sammy Speno Band, The Cayugans, The Matadors and the Auburn Civic Band. Along with her love of music, Marge was an active member of the First Baptist Church, where she taught Sunday School and sang in the choir. Marge enjoyed spending time with her children, extended family and close friends. She had a love of music and laughter. Marge was a warm, gentle, joyful soul who was loved by anyone who’s life she touched, even in the smallest ways. Marge is survived by her sons, Jason Teeter, Naples, FL, and Derrick (Christine) Teeter, Conway, SC; her daughter, Maria (Andrew) Houghton, Charlotte, NC; two loving sisters, Hazel Garvin and Carolyn MacLean, Ithaca, NY; seven grandchildren, Derrick, Lindsey, Nick, Lee, Emily, Lisa and Keith; five greatgrandchildren; a very special “brother,” Mark Prentice, her best friend of 57 years, Jeanne Pinckney, Auburn, NY; and many loving nieces, nephews and cousins. She was predeceased by her sister, Edie Garvin in 2012. Due to the Covid Pandemic, no services will be held at this time. A Celebration of her life will be held in 2021, at the convenience of the family. In lieu of flowers, a donation may be made in Marge’s memory to Novant Health Hospice, P.O. Box 33549, Charlotte, NC 2814. James Funeral Home is assisting the family, online at www.jamesfuneralhomelkn.com.

The family of Margaret Eleanor Teeter created this Life Tributes page to make it easy to share your memories.

Send flowers to the Teeter family.