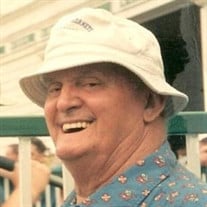 Marion Howie Lands passed away on January 10th from a fall suffered on January 7th surrounded by family. Born on June 29th 1929, son of Jesse D. Lands and Mae Green Lands. Marion attended Bethune Elementary, Villa Heights, and Harding High in Charlotte. Marion served in the Marines and also in the Army. He was a master plumber. He enjoyed going to flea markets, watching NASCAR, the Panthers, and was an animal lover. He never met a stray dog he wouldn't bring home. He was preceded in death by his parents, brothers Max Lands, Albert Lands, and his sister-in-law Barbara Lands. He is survived by Elliotte Lands, Herman Lands (JoAnn), Jane Lands, and Phyllis Foote. He loved his family and enjoyed his nieces Kelly Lands Bruce, Kendall Lands Solomon, along with his nephews Michael Lands, Craig Lands, Jason Lands, Dale Lands, David Lands, Kent Lands, Dean Lands, and Chris Lands. He had a special friend for years Rosalie Tindle. Any donations can be made to the Humane Society. A memorial service will be held at a later date. A graveside will be held at 1 PM Saturday, March 20, 2020 at Elmwood Cemetery. James Funeral Home is serving the family.

The family of Marion Lands created this Life Tributes page to make it easy to share your memories.

Marion Howie Lands passed away on January 10th from a fall suffered...

Send flowers to the Lands family.