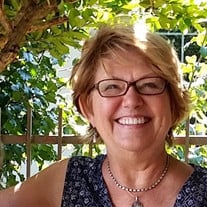 Marion Kutyla Paynter died peacefully at home in Cornelius, NC on July 27, 2020, succumbing to the brain cancer she fought with grace and courage for a year. Her vividly lived life far outweighed her last struggles. Her family showered her with love and gratitude for all of the beauty that she has brought to this world. She was surrounded by the love of her life and husband of 46 years, Steven Wilkins Paynter, Cornelius, NC and their son Christopher Kutyla Paynter (Carrie Paynter), granddaughter Ella Paynter, and daughter Laura Wilkins Paynter (Patrick Hollowell), of Charlotte. Siblings Diane Kutyla Cavalcante (Richard Cavalcante) of Mooresville, NC and John Kutyla (Sally Kutyla) of West Grove, PA. Marion was born to Peter and Cecelia Kutyla in Scranton, PA. After moving early in life to Linden, NJ, Marion graduated from Linden High School and earned her bachelor's degree from Trenton State College. In endless ways Marion taught her family to love the act of learning. Marion continued studying and graduated with a Masters of Library Science from Rutgers University. The highlight of her professional life was working for 19 years at the Charlotte Observer, serving as research librarian before her retirement. In her work at the Observer, Marion was known for her humor, friendliness, and passion for contributing to an organization that provided a vital journalistic need. Marion saw life as an adventure to be experienced as fully as possible and the map of the world an invitation to explore. She studied abroad in Denmark and learned French in Switzerland. After starting work at the cargo desk at Pan American Airlines she eventually became an international stewardess in the early 1970’s. In 1974 Marion married a fellow world traveller in Steve and they started their family in Rochester, New York. When presented with the opportunity to move their family to Singapore for business in 1989, there was no hesitation in the decision to go. After the three year adventure in South East Asia concluded, Marion and her family returned to Lawrenceville, NJ before relocating to Cornelius, NC. Everywhere she went, Marion built a community of family and friends. When they finally settled in Cornelius in 1993, she declared that she had found her forever home on Lake Norman. Marion enjoyed retirement fully and was able to travel with family and friends, gardening and crafting at her home, and by providing loving care for her granddaughter, Ella. A celebration in remembrance of Marion’s rich and generous life will be announced at a later date. The family would like to give special thanks to the skilled and caring staff at Levine Cancer Institute and Hospice of Lake Norman. In lieu of flowers the family requests that donations be sent to Samaritans House or Hospice. James Funeral Home of Huntersville served the family.

Marion Kutyla Paynter died peacefully at home in Cornelius, NC on July 27, 2020, succumbing to the brain cancer she fought with grace and courage for a year. Her vividly lived life far outweighed her last struggles. Her family showered her with... View Obituary & Service Information

The family of Marion K. Paynter created this Life Tributes page to make it easy to share your memories.

Send flowers to the Paynter family.