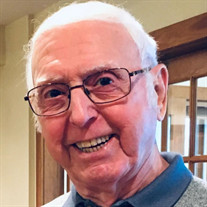 Marshall Bryant Hilton passed away peacefully at home in Charlotte, North Carolina, at the age of 88 in the early morning hours of June 21, 2020. Born in Keene, New Hampshire, on April 22, 1932 he was the eighth of nine children of Albert Victor and Myrtle Bryant Hilton. After graduating from Keene High School, he attended the University of New Hampshire, and earned a Bachelor of Arts degree with honors in 1954, majoring in biology. During college he was enrolled in the Reserve Officer Training Corps (ROTC). Following graduation, he joined the U.S. Air Force as a second lieutenant working as a navigator from 1954 to 1957. He remained in the U.S. Air Force reserves until 1970 when he was honorably discharged with the rank of Captain. After finishing his military service, he moved to California and began working in the medical industry, ultimately in sales of medical and lab supplies. While working for Warner Lambert, he was transferred to headquarters in Morris Plains, New Jersey. There, he met his future wife, Joyce Ann Allen, also employed by the company, in 1964. After several cross-country relocations for both, they were married in San Francisco on March 12, 1966, and settled first in Novato, and then in Sebastopol, California. While working, Marshall attended Golden Gate University in San Francisco, earning an MBA in 1973. They had a son, Bryant, and a daughter, Allyson, and the family returned to Middletown, New Jersey in 1981. Ultimately, he became an entrepreneur, after purchasing a small laboratory supply company from a friend, which he managed until his retirement. That change moved the family to Richboro, Pennsylvania, in 1988 where they lived until retiring to Charlotte in 2008. He pursued lifelong hobbies and passions including gardening and genealogy research. His efforts traced parts of his family’s ancestry to 15th Century England, uncovered the story of his and his wife’s families’ histories in America dating from the 17th century, made it possible to visit the house in Manchester, England, in which his grandfather was born, uncovered the lineage of one of his children’s great grandparents which was previously unknown, and connected him to second cousins living in England today. He traveled – personally and professionally – throughout his life. He completed his goal of visiting all 50 U.S. states in 2016, during a visit to Alaska. Throughout his life, he was known for his dry sense of humor and quick wit – and immediately felt closest to those who could “serve it right back.” On his last day he was still trading jokes with his grandchildren and caregivers. He is survived by his wife, Joyce Hilton, of Charlotte; his son, Bryant Allen Hilton, of Austin, Texas; his daughter Allyson Jean Yanni, and her husband Jason, of Concord, North Carolina; and his three grandchildren, Caroline, Carsyn, and Aaron Yanni. Additionally, his brother-in-law Nelson Morin in Maryland, sister-in-law Patricia Hilton in New Hampshire, sister-in-law Cathy Hilton in California, brother-in-law Robert Allen and his wife Pat in Florida, and scores of cousins, nieces, and nephews from several generations help carry on his memory. In lieu of flowers, the family asks that donations be made to a cause important to the donor or his or her community, or to Novant Hospice, PO BOX 33549 Charlotte, NC 28233-3549, which provided him excellent care in the last few weeks of his life. James Funeral Home of Huntersville is serving the family. www.jamesfuneralhomeLKN.com

Marshall Bryant Hilton passed away peacefully at home in Charlotte, North Carolina, at the age of 88 in the early morning hours of June 21, 2020. Born in Keene, New Hampshire, on April 22, 1932 he was the eighth of nine children of Albert Victor... View Obituary & Service Information

The family of Marshall Hilton created this Life Tributes page to make it easy to share your memories.

Marshall Bryant Hilton passed away peacefully at home in Charlotte,...

Send flowers to the Hilton family.