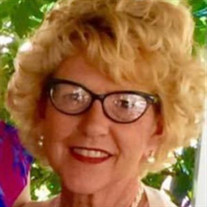 Charlotte- Martha Watson Dayton, “Muffy”, 64, passed away on March 18, 2021 in Matthews, NC. She was born on May 2, 1956 in Spruce Pine, North Carolina, to Frank and Jane Watson. Muffy was the youngest of 4 children —Nancy Watson Burleson, Frank Hampton Watson Jr., & Laura Jane Watson. She attended Harris High School in Spruce Pine and met her husband, Bobby, during her sophomore year. Muffy went on to Appalachian State University for her undergraduate studies and majored in Education. She was an active student, a member of the Cheerleading Team and Delta Zeta Sorority. Many of her lifelong friends were sorority sisters. After graduation, Muffy and Bobby were married at Central Baptist Church in Spruce Pine, where she was a member since 1956. Bobby and Muffy were devoted to each other and were married for over 42 years. They rarely spent more than a week apart. Muffy adored her two sons, Hampton “Drew” Dayton, and Robert “Turner” Dayton. She loved attending their sporting events and was very involved as a mother, even presiding over Little League Baseball for a period of time. She never missed a sporting event during their childhood. Muffy was also a lifelong educator - working in the Mitchell County School system as a Guidance Counselor, Assistant Principal and Principal for over twenty years. She went on to get her Masters in Education and EdS at Western Carolina University. She touched countless lives during her career and had a passion for giving a voice to the voiceless. In 2018, Muffy and Bobby moved to Charlotte, NC so that they could spend more time with their 6 grandchildren. “Bebe”, will forever hold a place in their hearts - Wyatt Robert Dayton, Nola Dorothy Dayton, Aaron Matthew Dayton, William Porter Dayton, Hampton Laurel Dayton, and Parrish Rhodes Dayton. Muffy was an avid reader, often finishing multiple books in a week. She loved shoes and pocketbooks, to dance, and to laugh and spend time with friends and family. Her favorite place on earth was Deltaville, Virginia, where her family has vacationed since the 1930s. The family will hold a small, private, service on the “dock of the bay”, where she was happiest. In her memory, donations can be made to the Martin Truex Foundation/Sherry Strong: https://www.sherrystrong.org/donate/ James Funeral Home of Huntersville is serving the family.

The family of Martha Dayton created this Life Tributes page to make it easy to share your memories.

Send flowers to the Dayton family.