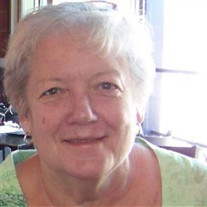 Martha Hufham Rivenbark, age 77, of Cornelius, NC, died on Monday, June 1, 2020 at her home surrounded by her family. She was born in Wilmington, NC on December 1, 1942, the daughter of Hubert Stratton Hufham and Louise Bolton Hufham. Martha is survived by her husband, Arthur Jackson Rivenbark of Cornelius, brother Reuben Hufham and his wife Genie of Charlotte, and her children, Scott Rivenbark and wife Jane of Roanoke, VA, Susan Schorer of Alpharetta, GA and Kelly Mandeville and husband Matthew of Richmond, VA; grandchildren Kathryne and Sarah Rivenbark, Connor, Riley, and Rachel Schorer, and Ella and Jackson Mandeville. After graduating from New Hanover High School in Wilmington in 1960, Martha and Jack were married in Wilmington on August 19, 1961. After a few years Martha and Jack lived in Florence, SC, Raleigh, NC and then relocated to Greensboro, NC where they raised three children and lived for 32 years. In 1999 Martha and Jack moved to Cornelius, NC and spent the next 20 years overlooking and spending time on Lake Norman. She and Jack enjoyed 58 successful years of marriage. It was a lifelong dream of Martha’s to obtain higher education in the medical field, so after her children were well established, Martha entered pharmacy school at the University of North Carolina in Chapel Hill. Being distinguished as UNC’s oldest pharmacy student, she graduated on July 24, 1996. She obtained one of the highest scores on the NC Board of Pharmacy ever made. After a brief period as a staff pharmacist at Kroger in Greensboro, she worked for Wal-Mart and retired at the end of 2017 after 20 years of service. Martha was a long-time member of both Temple Baptist Church in Wilmington and Friendly Avenue Baptist Church in Greensboro, NC. Martha loved life, her family, and spending as much time at Wrightsville Beach as possible. She also had a deep love of snow skiing, and made numerous family trips to Snowshoe, WV and her favorites, Vail and Snowmass, CO. She will be dearly missed. A memorial service will be held on Saturday, June 6, 2010 at 2:00 pm at Andrews Mortuary Market Street in Wilmington, followed by internment in Greenlawn Memorial Park at 3:00 pm. Donations may be made to the Pancreatic Cancer Action Network https://secure.pancan.org/site/Donation2?df_id=2681&mfc_pref=T&2681.donation=form1 Love you Mom – her family.

Martha Hufham Rivenbark, age 77, of Cornelius, NC, died on Monday, June 1, 2020 at her home surrounded by her family. She was born in Wilmington, NC on December 1, 1942, the daughter of Hubert Stratton Hufham and Louise Bolton Hufham. Martha... View Obituary & Service Information

The family of Martha Hufham Rivenbark created this Life Tributes page to make it easy to share your memories.

Send flowers to the Rivenbark family.