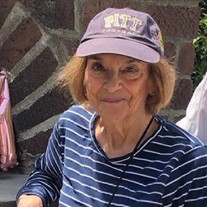 Mary Lee Gottus Linsenmayer, 80, of Davidson, died December 30, 2021 at Lake Norman Regional Medical Center. She was born on October 30, 1941 in Pittsburgh, PA, to the late Thomas and Rosalie Gottus. Mary Lee was loved by many for her joyful demeanor and dedication to family and friends. She grew up in Baden, outside of Pittsburgh, and attended St. Veronica catholic school in neighboring Ambridge. At the time of her passing, she was still friends with her classmates and would speak with them regularly. After school, she lived in Boston and worked for an advertising agency. Her creative gifts were plenty and they loved her ideas. After Boston, she moved back to Pittsburgh and fell in love with Bob, her husband of 54 ½ years. Mary Lee and Bob did everything together. In the 1980s, they got their licenses and opened a real estate business together. When her children were reaching college age, and Bob was considering law school, she made it all happen financially by taking a position at Duquesne University, where Bob and all three of her kids earned degrees. Mary Lee herself also earned her English degree, a pursuit that (except for that Algebra class) was a source of constant enjoyment for her. After supporting her husband in his subsequent legal profession, the opportunity came up for her to pursue her own passions. When her mother died, Mary Lee took her inheritance and built a business called Mary Lee’s Meals, a catering/ cooking class/ prepared meals business in the North Hills of Pittsburgh. She was never happier than when she was engaging with customers, planning parties, and becoming The Fairy Godchef of Mary Lee’s Meals. Her customers still consider her a friend and many continued to keep in touch. When she and her husband retired, they moved to North Carolina, to live near their youngest child and his family. She and Bob embraced their new lives in the south, and comfortably stepped into being members of the quaint community that is Davidson. Mary Lee always looked on the bright side of life. She did the best she knew how to do to be a good mother, wife, daughter, aunt and friend. She will be sorely missed by her family and friends and the impact she made on her family will be felt for generations to come. Survivors include her husband Robert Bruce Linsenmayer; sons, Raymond Linsenmayer (wife Deborah Eisenberg) of Arlington, VA and James Linsenmayer (wife Jennifer) of Davidson, NC; daughter, Mary Elizabeth Linsenmayer-Morse (husband Gregory) of Arlington, VA; and grandchildren, Miriam, Charles, Allan, Peter,Abigail, Sarah, Isabella and Noah. Her sister Geraldine preceded her in death. In lieu of flowers, donations in Mary Lee’s name can be made to St Paul’s Evangelical Lutheran church at 10301 Walter Rd, Allison Park, PA 15101. A party to celebrate her life will be held in Pittsburgh, PA in the Spring of 2022. James Funeral Home of Huntersville, NC is serving the family.

Mary Lee Gottus Linsenmayer, 80, of Davidson, died December 30, 2021 at Lake Norman Regional Medical Center. She was born on October 30, 1941 in Pittsburgh, PA, to the late Thomas and Rosalie Gottus. Mary Lee was loved by many for her joyful... View Obituary & Service Information

The family of MaryLee Linsenmayer created this Life Tributes page to make it easy to share your memories.

Send flowers to the Linsenmayer family.