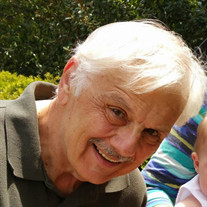 Michael Dennis Laccinole, of Charlotte, NC passed over—over into endless life and peace and glory, where every tear will be wiped away…on Tuesday, April 19, 2022 at Levine & Dickson Hospice House in Huntersville, NC. Dr. Michael Dennis Laccinole was born in Portland Oregon on December 13th, 1948 to Jeanette Nowak and Antonio Laccinole. In addition he was preceded in death by his sister Rosalie Summerville. Michael went to Mount Angel Seminary High School and College in St. Benedict, Oregon from 1963-1971. He was also a Benedictine monk for a year at Mount Angel Abbey. He married Kathleen Marie Gerlits on May 11th, 1973 at St. Joseph's Catholic Church in Salem, Oregon. He furthered his education by receiving his Master's in 1978 then his PH.D in Speech Language Pathology at University of Oregon in 1982. He was a professor at University of North Dakota and West Texas A&M University. The majority of his career was spent as a rehab/ clinical director for rehab facilities. He had a huge heart for his patients and his coworkers. Gardening was a lifelong enjoyment for him, and he had an avid interest in history. He also loved his Catholic faith. He enjoyed the simple moments in life and spending his days with his wife Kathleen and son Gregory. He adored his grandchildren. Michael is survived by his wife Kathleen, brother John Laccinole (Mary), son Christopher, son Gregory and daughter Kelly Hudspeth (Caleb Hudspeth); by 5 grandchildren Chase Laccinole, Cosette Hudspeth, Arthur Hudspeth, Torin Hudspeth and Oliver Hudspeth. A Mass of Christian Burial will be held on Friday, April 22, 2022, at 3:00 PM, at Saint Gabriel Catholic Church in Charlotte. Burial will follow at Northlake Memorial Gardens in Huntersville. In lieu of flowers donations can be made to Mount Angel Abbey, 1 Abbey Drive, Saint Benedict, OR 97373. The family thanks you for your prayers and support during this time.

The family of Michael Dennis Laccinole created this Life Tributes page to make it easy to share your memories.

Send flowers to the Laccinole family.