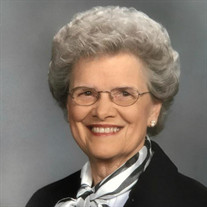 Mildred (Millie) Burgess, 95, passed away on Saturday, May 22, 2021 at TerraBella Lake Norman assisted living community in Mooresville, North Carolina. Millie was born on January 31, 1926, in Vineland, New Jersey to the late Albert and Carrie Moffitt. On March 16, 1946, she married Lawrence Ellis Burgess at Riverside Baptist Church in Buffalo, New York. During their 52 years of marriage, Larry and Millie lived in Buffalo, New York; Newark, Delaware; Jonesboro, Arkansas; and Charlotte, North Carolina. Millie Burgess was preceded in death by her husband, Larry, in 1998; and her siblings, Albert Moffitt, Jr., Bill Moffitt, John Moffitt, and Delores Walter. She was also preceded in death by her eldest son, Daniel Burgess, in March of this year. Millie is survived by her daughter, Diane Hofert of Mooresville, North Carolina, and her son, David Burgess (Susan) of Paragould, Arkansas; along with four grandsons, Scott Hofert (Taryn), Nels Hofert (Naomi), Brian Hofert (Gina) and Adam Burgess; and seven great-grandchildren, Emma, Ethan, Colsen, Jackson, Keane, Paisley, and London. A celebration of Millie’s life will be held at 2:00 P.M. EST on Friday, May 28, 2021 at James Funeral Home of Huntersville, North Carolina. The service will be live streamed at: https://www.facebook.com/JamesFuneralHome/ Millie will be buried next to her husband at the Elmlawn Memorial Park in Buffalo, New York during an interment ceremony at a later date. In lieu of flowers, memorials may be made to Watershed Church, 2101 Shenandoah Ave, Charlotte, NC 28205 or to Hospice of Lake Norman, 705 Griffith Street, Suite 203, Davidson, NC 28036.

The family of Mildred Burgess created this Life Tributes page to make it easy to share your memories.

Send flowers to the Burgess family.