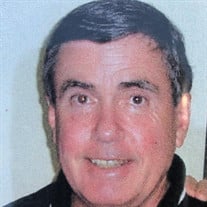 Paul Wayne Hoffman, 75, of Charlotte passed from this life into heaven on November 12, 2020. He was born to the late C. Robert and Carolyn Gack Hoffman on February 17, 1945 in Abington, Pennsylvania. A graduate of Abington High School in 1963 and the “U” of Miami (FL) in 1968 he was married to the love of his life Martha Christy for 48 years. Paul became a faithful follower of Jesus Christ later in life. From an early age, baptized in St. Peter’s Episcopal Church in Glenside, PA, he was interested in the Christian faith. Upon moving to Charlotte, NC, he and Martha united with Craig Avenue Associate Reformed Presbyterian Church and later the King’s Cross ARP Church. Paul became a man of deep faith and had a love for Christ, studying the Bible and actively engaging in fellowship with his many friends in the church. He served as a deacon, an elder, and member of First Presbytery. He participated in the planting of new congregations, college ministry and served on the General Synod of the ARPC Board of Benefits. Paul loved people and always encouraged Gospel ministry in his quiet, patient, determined, and yet gentle manner. He modelled what a loyal and a generous friend ought to be despite what anyone ever thought, serving Jesus Christ first. He always enjoyed playing golf with his friends, and took in more baseball games than is “humanly imaginable” as he would say. He is survived by his beloved family of King’s Cross Church and many “friends from over the years.” In lieu of flowers, memorials may be made to the King’s Cross Church, 3936 Craig Avenue, Charlotte, NC, 28211. A graveside service will be held at Prosperity in Atlanta Georgia on December 5 at 12pm. James Funeral Home of Huntersville is serving the family. www.jamesfuneralhomeLKN.com

Paul Wayne Hoffman, 75, of Charlotte passed from this life into heaven on November 12, 2020. He was born to the late C. Robert and Carolyn Gack Hoffman on February 17, 1945 in Abington, Pennsylvania. A graduate of Abington High School in 1963... View Obituary & Service Information

The family of Paul Hoffman created this Life Tributes page to make it easy to share your memories.

Paul Wayne Hoffman, 75, of Charlotte passed from this life into...

Send flowers to the Hoffman family.