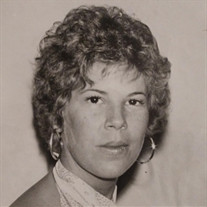 Paula Kay Slevin, 73, passed away on Friday, January 29, 2021. She was born on March 10, 1947, in Pennsylvania, to the late Royce and Naomi Powell. Her passion was the outdoors. She lovingly tended to the flowers and trees on her property. She dedicated herself to the care of her Paso Fino horses and loved to trail ride. When she was young she adored watching episodes of MASH and trading wit with her grandfather. On her wedding night she couldn't wait to watch SNL, guest hosted by the "old grandmother." Later in life she rarely missed watching a Jeopardy episode with family. Everyone knew that she possessed sassy, witty, humor and was a profoundly good listener. Paula loved the years she spent working with the special people at Service Link, but more than anything else she was proud to be a Grammie to three wonderful grandsons. Her love and dedication to them has been so special. Paula will be missed by countless friends and family but most of all by her dearest friend, her husband of nearly 44 years, Mike. In addition to her parents, Paula was preceded in death by her brother, William Powell. Paula is survived by her husband, Michael Slevin; daughter, Katie Pierce (David); grandchildren, Dahmon, Alec, and Andrew; and sister, Janna Ferguson (David Diers). Paula's family would like to extend their most heartfelt thanks to Todd Slevin and family as well as Reverend Sammy Pierce and his family for their special support during this difficult time. A socially distant visitation will be held Thursday, February 4, 10:00 AM at James Funeral Home, in Huntersville, for her North Carolina family and friends, followed immediately by the funeral service at 11:00. A celebration of life will be held to honor Paula in Beaver Pennsylvania at a date to be determined this summer. In lieu of flowers, donations may be made to the Operation Christmas Child Campaign with Samaritan's Purse. James Funeral Home, of Huntersville, is serving the family

Paula Kay Slevin, 73, passed away on Friday, January 29, 2021. She was born on March 10, 1947, in Pennsylvania, to the late Royce and Naomi Powell. Her passion was the outdoors. She lovingly tended to the flowers and trees on her property.... View Obituary & Service Information

The family of Paula Slevin created this Life Tributes page to make it easy to share your memories.

Send flowers to the Slevin family.