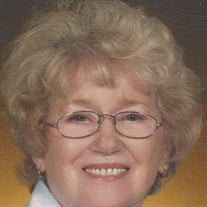 HUNTERSVILLE AND FRANKLIN – Pauline (Polly) Keener Kirkland, 88, passed away Sunday November 29, 2020. Born in Cullasaja, North Carolina, just outside of Franklin NC, Polly was the sixth of eight children of the late John H. Keener Sr and Dana Keener of Brevard NC. Polly’s husband of 68 years, Fred, passed away on March 14, 2020. She was also preceded in death by her brothers - John Jr and Harold, sisters - Dana, Hazel and Viola, and nephew Steve. Polly is survived by her 99 year old sister Carolyn and brother Eugene, 3 sons - Jack and his wife Cathy of Huntersville NC, Mike and his wife Carolyn of Westfield NJ & Tim and his wife Terri of Asheboro NC, 6 grandchildren - Eric Kirkland and his wife Rachelle, Mandy Kirkland Underwood and her husband Kevin, Michael Kirkland Jr, John Kirkland, Logan Kirkland and Gracie Kirkland, and 9 great-grandchildren - Jackson Kirkland, Jackson Underwood, Joshua Kirkland, Tim Underwood, Abby Underwood, Ryan Kirkland, Catherine Underwood, Charlotte Underwood and Benjamin Underwood. With seven brothers and sisters, Polly is also survived by several nieces and nephews. Let’s see there’s Sandra, Susan, Johnny, Larue, David, Carol, Hal, Roger, Ashley & Justin. Born on February 24, 1932 in the depths of the great depression, Polly lived in the Franklin NC area through her junior year at Franklin high. The family then moved to Brevard NC where Polly finished her senior year at Brevard High in 1950. After high school, Polly lived with her sister Dana in Aiken SC and worked in the local nuclear power industry as an admin and typist, a common path at that time for young ladies not going on to college. Little did she know it then, but her brother Harold was attending classes at Western Carolina with a mountain kid named Freddie Kirkland. After some subtle maneuvering of Harold, Freddie managed to get an introduction to Polly on one of her visits back to Brevard. Things went pretty quickly (for the 50s) from there. Then the Korean War broke out and both Polly’s brother Harold and Freddie volunteered for the Navy. Before shipping off to basic training, Freddie popped the question. Upon completion of basic training, Freddie returned home and they were married. Soon thereafter they were off to San Diego CA where Freddie was sent to Navy schools. Their truly “Wonderful Life” had begun. Polly’s first son Jack was born in 1953 while Fred was on his 2nd tour off the coast of North Korea. Polly crossed the country on her own twice while Fred was on 3 overseas tours. After the war, Polly and Fred moved to Opelika Alabama where Fred studied Electrical Engineering at Auburn and Polly took care of everything else on a shoe string VA budget. Oh yea, that’s where the number two son Mike came along in 1955. After college, Polly and Fred moved to Winston Salem NC where Fred went to work for Western Electric and Polly resumed the role of running everything at home, but now with a bit better budget. Oh yea, that’s where the number three son Tim came along in 1960. They lived in Winston and Greensboro through about 1976 while Fred worked at Bell Laboratories. Then they began the biggest and most thrilling journey when the moved to New Jersey while Fred worked at AT&T Long Lines. This period was filled with travels all over the world as Fred worked on various undersea cable projects. To England, to Greece, to Egypt, to Taiwan to the Caribbean and to other exotic spots they traveled. This is where Polly, already an accomplished seamstress, began to develop her extriodiary cullenary skills. By the time Fred retired in 1987 they had filled 2 passports and Polly was an accomplished chef. Lucky Fred had his own personal chef for life. After retirement, Polly and Fred tried chasing their children around the country, but gave up on that fruitless plan and moved for the last time in 1994 to Franklin NC where Polly was born and grew up. This final move was actually to Franklin NC’s Patton Valley, but Polly always looked at it as moving home. Very early on they became involved in the “Friends of the Library” and then they joined Patton UMC and began 26 years of involvement with their new, and their last, church family. While Fred was involved multiple gospel/bluegrass/folk bands, Polly involved herself with her cooking and gardening. Polly said many times that their home in Patton Valley was her and Fred’s “little piece of paradise on earth”. James Funeral Home of Huntersville NC is serving the Kirkland family and can be contacted at 704-948-9004 or at www.JamesFuneralHomeLKN.com . Polly will be buried on the grounds of Patton UMC. A celebration of Polly’s life will be held there in the near future. In lieu of flowers, memorials can be made in Polly’s memory to either her church “Patton UMC” or to “Hospice & Palliative Care Lake Norman” who provided loving care through her final days.

The family of Pauline Kirkland created this Life Tributes page to make it easy to share your memories.

Send flowers to the Kirkland family.