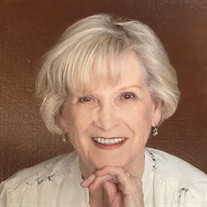 Peggy Ann Brasington Morgan passed away on July 5, 2020. She was born on April 10, 1933 in Charlotte to Eugene and Cora Brasington. Peggy was a long-time member of Bethel Presbyterian Church. Over the past fifty years, she served in the Youth Club, Bethel BBQ, Meal Preparation, Card Ministry, Sewing Ministry, and was a member of the Bethel Ramblers. She was awarded the Honorary Lifetime Award at Bethel for her devoted service. Peggy was instrumental in starting a non-profit fund in 1978 at Cornelius Elementary School, where she purchased clothing and shoes for children in need. Aside from being a mother and homemaker, Peggy performed secretarial duties to assist her husband, Jack, with his work at Mac Tools and Morema. She loved spending time with her grandchildren and great grandchildren and shopping for them. She will be remembered for her generous nature and her kindness to others. Peggy was preceded in death by her husband of 64 years, Charles “Jack” Morgan, three brothers, John David Brasington, Eugene Brasington, Richard Brasington and one sister, Colene Flannigan. Peggy is survived by four children: Beverly Morgan Epperson (Sandy); Terry Edmundson (Chris); Cathy Lanning (David); and Greg Morgan (Mary); seven grandchildren: Andrew Epperson (Kelsi); Kristine Lovell (Kevin); Ashley Jay (Justin); Charles Lanning (Rachel); Sam Edmundson (Sarah), Renee and Joshua Morgan; and two step-grandchildren: Tim Epperson and Amy (Todd) Nelson. In addition, Peggy has three great-grandchildren: Roselyn Epperson, Everett and Elliott Lovell, and five step-great grandchildren: William and Curtis Epperson, Lana and Camden Nelson, and Austin Steiner. Thank you to the many wonderful caregivers from Home Careolina who have taken care of our Mom. Thanks also to the nursing staff at Novant Medical Center who provided her with compassionate and heartfelt care. The family also wishes to thank those who prayed, called and sent cards to our Mom over the past several months. A private family graveside service will be held on Wednesday, July 8, 2020 at Bethel Presbyterian Church. In lieu of flowers, memorials may be made to Bethel Presbyterian Church, 19920 Bethel Church Road, Cornelius, NC 28031 or to her great grandson (Elliott B. Lovell) to help defer the costs of his upcoming heart surgery at P.O. Box 327, Cornelius, NC 28031. James Funeral Home is serving the family. www.jamesfuneralhomeLKN.com

Peggy Ann Brasington Morgan passed away on July 5, 2020. She was born on April 10, 1933 in Charlotte to Eugene and Cora Brasington. Peggy was a long-time member of Bethel Presbyterian Church. Over the past fifty years, she served in the Youth... View Obituary & Service Information

The family of Peggy Morgan created this Life Tributes page to make it easy to share your memories.

Send flowers to the Morgan family.