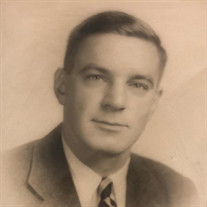 Peter S. Merrifield, 92, of Davidson, North Carolina Passed Away on December 14, 2020. Peter S. Merrifield passed away quietly after a period of declining health and heart failure on Wednesday, December 14, 2020, just one week shy of his 93rd birthday. Peter was predeceased by his wife of nearly 65 years, Nancy Merrifield, who passed in August of 2018. The first-born son of Anne and Clifford Merrifield, he enjoyed his charmed childhood in Maplewood, New Jersey, spending many happy summers fishing at the Lily Pond in Southampton on Long Island with his brother Eric. A clever and resourceful young man, he made skis to forge cross country trails behind his home and was the captain of the soccer team at The Hill School. He chose not to take an academic route after graduating from The Hill, and after trying several careers, in 1952 during the Korean war, he decided to join the Navy and was posted to the U.S.S. Gwin (DM-33). It was during this time that he met the love of his life, Nancy Hilton Oppy, on a blind date at a dance in Watch Hill, Rhode Island. They were married in October of 1953, and settled down in the Carolina Village of the Town of Richmond, R.I. where they raised their two boys. Peter joined and then took over for Nancy’s father in running the C.W. Willard Hardware Store, a fixture of downtown Westerly, R.I. for over 100 years. In 1972, he and Nancy decided to retire to the country life in Antrim, New Hampshire where they spent 38 years. There, he plied his true profession in earnest, spending time with Nancy. When he wasn’t building stone walls, cutting brush, tinkering in the cellar with tools and wood, grilling in all sorts of weather, taking photos, or doing the dishes, he was civically engaged, as a member of his local School Board, Planning Board and Library Board. Peter was always quick with a smile, or tears in his gorgeous sky-blue eyes, he could tell a funny story, listen to your problems, and was a great entertainer, offering to “freshen your drink” even before you knew it was empty. As Peter and Nancy aged, they spent more time touring Maine, New Hampshire and Vermont, where they loved nothing better than eating fresh seafood and poking around in antique stores. Peter and Nancy moved to Davidson, North Carolina in 2010 to be closer to family. He was grateful until the end for what he called his “beautiful and lucky life.” Of all his accomplishments, he was most proud of raising “my two good sons”, Mark Merrifield (Patricia), of Appleton, W.I. and Jeffrey Merrifield (Diana) of Davidson, N.C. He loved and was loved by his and Nancy’s seven grandchildren; Caroline (Raghav Badrinath), Scott (Amy Sondles), Seth (Fiancée Emily Rohan), Graham, Althea, Trevor and Abigail. Caroline and Raghav are the parents of his great-grandchild, Ila. Along with Nancy, Peter was preceded in death by his two younger brothers, Eric Merrifield and David Merrifield. We will miss him greatly though comforted to know that he and Nancy are reunited. It was Peter’s wish that there not be a memorial service, and in lieu of flowers, donations may be made in his name to the Trustees of James A. Tuttle Public Library, P.O. Box 235, in Antrim, New Hampshire 03440.

The family of Peter Merrifield created this Life Tributes page to make it easy to share your memories.

Send flowers to the Merrifield family.