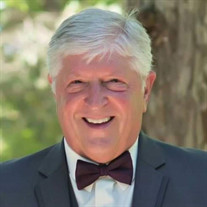 Conrad Raynor Howison, Sr. (Ray), 70, of Cornelius, died on December 19th, 2020 after a brief stint in the hospital. Ray was the son of the late John E. Howison, Sr. (Jack) and Sue Forster Howison. Born in Arlington, VA, his family moved to moved to Rock Hill, SC where Ray grew up. His love of music began at the age of 16 in Rock Hill where he joined the band, The Scribes, as a guitarist and continued to play throughout his entire life. One of his proud moments was cutting their first record. Recently, Ray played music with various groups in the Lake Norman area. Ray had a vibrant presence to everyone who knew him. He was known as the unofficial mayor of Cornelius and knew everyone wherever he set foot. The community knew Ray as he drove around in his little red corvette. He was a very driven person and self-motivated, creating his own successful business, QRS Inc., in 1992 and growing it throughout the years with dedication to quality and service. His love of golf grew stronger as he became a member of the Mel Tillis golfing group which consisted of close friends and required several trips to Myrtle Beach each year. Ray cherished the comradery of this group. Ray had a firm belief in his church of over 30 years, Bethel Presbyterian, and served his country for six years in the US Army Reserves. His faith was unwavering and his love for the military was forever dear to his heart. Ray deeply loved his family and welcomed his first grandson in 2019, Maxson, whom he adored. After several successful surgeries at Boston Children’s Hospital for Maxson, Ray felt very comforted knowing Max would be ok. Ray is survived by his wife of 41 years, Karen Stowe Howison; daughter, Morgan Piercy (Jay), son, Conrad Howison, Jr., brother, John Howison, Jr. (Jack), 9 nieces and nephews. A private service will be held on January 2nd, 2:00 pm at James Funeral Home with live-streaming via Facebook Live. https://www.facebook.com/JamesFuneralHome/ In lieu of flowers, memorials may be sent to: Boston Children’s Hospital or Vein of Galen Support Network. Boston Children’s Hospital link: Boston Children's Hospital Trust Online Form - Those who’d like to make a gift donation to BCH can do so online here and complete the appropriate in memory contact information. Or a check can be sent to the following, noting the in memory name in memo: Boston Children’s Hospital Trust 401 Park Drive, Suite 602 Boston, MA 02215 Vein of Galen Support Network - https://vogm.org/in-honor-of-ray-howison Online condolences at www.jamesfuneralhomelkn.com.

Conrad Raynor Howison, Sr. (Ray), 70, of Cornelius, died on December 19th, 2020 after a brief stint in the hospital. Ray was the son of the late John E. Howison, Sr. (Jack) and Sue Forster Howison. Born in Arlington, VA, his family moved to... View Obituary & Service Information

The family of Ray Howison created this Life Tributes page to make it easy to share your memories.

Send flowers to the Howison family.