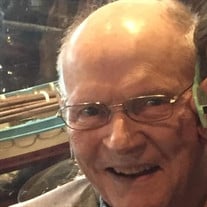 Davidson, NC - Rhodes Edmond Dodson passed away on January 21, 2021 at 86 after a life well lived. Born December 16, 1934 in Durham, Rhodes served in the Navy before beginning his career in banking where he served for about 40 years with the financial institution currently known as Bank of America. In 1964, he married Charlotte Ann Mims and, together, they raised their daughter, Angie, in High Point, Greensboro, Charlotte, and Tampa. As a family, the three spent lots of good times together travelling and at home in the company of beloved lifelong friends and adored pets. After Charlotte’s 1991 passing, Rhodes returned to Charlotte where he and Angie continued to enjoy their times together taking trips and visiting each other in Charlotte and Washington, DC. In 2015, Rhodes moved to The Pines at Davidson where he and Angie continued to enjoy each other’s company, often with friends and pets, both in independent living and, later, in nursing care. A celebration of Rhodes’s life will be held when it is safe to gather with those we love and who love us—Angie will be in touch. If you’d like to honor Rhodes’s good life just live your values, grow as you age, listen more than you speak, consider all sides, love your people unconditionally, show up, pave the way, come to the table with a plan, do good for those who need it most. If you’d like to make a gift in his memory, Rhodes long-supported Charlotte’s First Presbyterian Church and, later, kept connected with them by way of their TV Ministry (firstpres-charlotte.org; 200 West Trade Street, Charlotte, NC 28202). You may also consider a gift to The Pines at Davidson where Rhodes was exceptionally well taken care of by the community of neighbors, caregivers, and staff (thepinesatdavidson.org; 400 Avinger Lane, Davidson, NC 28036). A stalwart supporter of a number of non-profit organizations himself, Rhodes would also be pleased if you remembered him by supporting a charity of your own choosing. James Funeral Home of Huntersville is serving the family.

Davidson, NC - Rhodes Edmond Dodson passed away on January 21, 2021 at 86 after a life well lived. Born December 16, 1934 in Durham, Rhodes served in the Navy before beginning his career in banking where he served for about 40 years with the... View Obituary & Service Information

The family of Rhodes Dodson created this Life Tributes page to make it easy to share your memories.

Send flowers to the Dodson family.