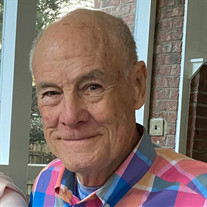 Richard Arthur Brown, of Huntersville, born March 30, 1937 at Central Maine General Hospital, Lewiston, Maine to parents: Lorine Ella Rogers Brown, born over the store at the Plains, Litchfield, Maine and Arthur Clayton Brown, born Madison, Maine. Richard died peacefully at home, early in the morning on November 29th. He was surrounded by his wife and daughters and had been awake and alert to be with his entire family 2 days prior on Thanksgiving Day. Richard grew up at 123 Lowell Street in Lewiston with his brother Lawrence and his parents until they sold the house in 1959 and moved to Greene, Maine. He graduated from Lewiston High School in 1955 and Bowdoin College in 1959. He also received a Master in Teaching from Colby College in 1966 and a Ph.D. in Inorganic Chemistry from North Texas University in 1971. In 1959, he was hired to teach science at Minnechaug Regional High School in Wilbraham, Massachusetts. He retired from Minnechaug in 1999 and was Science Department Chairman at the school for most of those years. In 1984 he was selected to attend a four week chemistry institute at Princeton University administered by the Woodrow Wilson National Fellowship Foundation. For the next seven years he was one of a four member team that presented 25 one week summer chemistry institutes to secondary school teachers across the United States. He received many other awards, including the Northeast High School Teaching Award given by the American Chemical Society, and The Massachusetts Secondary Chemistry Teacher Award given by the New England Institute of Chemists. He was active in the Windham Hill United Church of Christ and enjoyed being a grandfather to his three grandsons. He also took pleasure in gardening, genealogy, woodworking, reading and photography. He is survived by his wife of 55 years, the former Delanne Abbott; two daughters, Richelle McLean Brown Tieman and Christiana Rogers Brown Valley. He carries happy memories of his brother, his nephews, his cousins and his family friends. Some of his ashes will be spread over Androscoggin Lake in Wayne, Maine where he summered and waterskied competitively. He holds some of his most vibrant memories from this close knit community and his family cottage, Camp Otodo. In lieu of flowers, please send donations with Richard’s name in the memo to the Windham Hill United Church of Christ at 140 Windham Center Road, Windham, ME 04062. Services will be private. James Funeral Home of Huntersville is serving the family.

The family of Richard Brown created this Life Tributes page to make it easy to share your memories.

Send flowers to the Brown family.