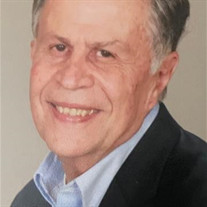 Huntersville-On Wednesday, September 15th, 2021, we had the privilege of walking our beloved, Richard J. “Dick” Christian home to be with the Lord. Dick was born June 22, 1942 in Hempstead, NY to parents James Joseph and Anna Christian, both immigrants from Italy and Germany. His family moved from Hempstead, NY to Tampa, Florida following the death of his father, where Dick attended Jesuit High School and later acquired an Associate of Arts degree at St. Leo College in Dade City, Florida. Married for 41 years to his bride and long-time business partner Elizabeth C. (Libby) Christian, they enjoyed working and traveling together, visiting different countries, and seeing the world through each other’s eyes. He is also survived by his son Jim (Libby) Christian of Terrell, his daughter Angie (John) Ellington of Charlotte, son Brian (Jennifer) Marks of Raleigh, daughter Linda West of Greenville, SC, son George (Angela) Leatherman of Concord and brother Dan Christian of West Palm Beach, Florida. His legacy also includes 10 grandchildren and 5 great-grandchildren. Dick was the founder and president of Insurance Management Company, a bonding and surety agency where he carried several designations, some of which required years of study and practice. Those designations were CPCU, CIC, CWCA and CRW but his pride and joy was his family. Dick made lots of very close friends in his business journey and in most cases, they became life-long relationships. Many thanks from his family to those of you who walked with him in this. When Dick was not spending time with those he loved, he was tirelessly giving of himself to his church, St. Mark Catholic Church in Huntersville, NC. He was instrumental in the Life Teen and Liturgy programs and many times had former youth approach him after mass to thank him for his love and commitment to their growth in the Lord. As a former Grand Knight in the Knights of Columbus, he learned to negotiate church and insurance, two of his favorite past times. The funeral mass will be held at 1pm, Monday September 27th, 2021 at St. Mark Catholic with visitation in the Narthex from 11:30am -1pm prior; burial will follow at Northlake Memorial Gardens. In lieu of flowers, the family is requesting donations be sent to Holy Angels of Belmont, NC which Dick believed to be such a worthy and endearing cause to be supported. James Funeral Home is serving the family.

Huntersville-On Wednesday, September 15th, 2021, we had the privilege of walking our beloved, Richard J. &#8220;Dick&#8221; Christian home to be with the Lord. Dick was born June 22, 1942 in Hempstead, NY to parents James Joseph and Anna Christian,... View Obituary & Service Information

The family of Richard "Dick" Christian created this Life Tributes page to make it easy to share your memories.

Huntersville-On Wednesday, September 15th, 2021, we had the privilege...

Send flowers to the Christian family.