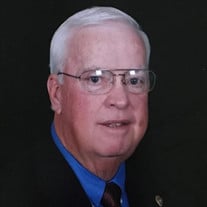 Richard Delaine Ferrell, 76 of Huntersville died July 11, 2020. He was born on November 13, 1943 in Mecklenburg County to the late Otis and Essie Ferrell Richard spent most of his career with the Mecklenburg County Police Department, rising from patrolman to Assistant Chief. After merging with the Charlotte Police Department Richard retired in 1994 as Deputy Chief. Richard was an avid golfer and a member of Cowan’s Ford Country Club, where he was "chairman" of the Monday and Friday games with some of his best friends. He attended "probability seminars", aka poker nights, with those same golf buddies at their homes. He also loved to travel, with some of his favorite destinations being Garden City SC, Hawaii, Las Vegas, Alaska & Switzerland. His family and faith were always his top priorities. He was always his happiest when he was surrounded by his children, grandchildren and great grandchildren. He gave wisdom, comfort, strength and love unconditionally. He would help anyone in need and he never met a stranger. He loved bragging to others about his family and his church. For many years Richard owned and cooked at Harris Lake Fish camp, which was a staple on Poplar Tent Road in Cabarrus county. Richard was a born again Christian and loved the Lord above all. He was an active member of Independence Hill Baptist Church, where he taught Sunday school. He had been on many of the church’s advisory boards and committees. Richard had been an active participant with the Hearts and Hammers mission projects which, over many years, built homes and buildings for individuals and organizations in need. Along with other members of the church, he would volunteer his time to help build handicap ramps for those that needed them. He loved spreading the Word of God and sharing his faith with anyone that would listen. He was a true and devoted man of God and we find comfort in knowing that he is rejoicing at the feet of Jesus now. He is survived by his wife of 42 years Nancy Cranshaw Ferrell, who he affectionately referred to as "His Bride"; daughter Susan German (Noel) of Lake Wylie, SC, sons Jeff Smith (Michelle) of Kannapolis, Chris Ferrell (Tifini) of Belmont, and Greg Ferrell (Angel) of Huntersville; 15 grandchildren and 4 great grandchildren. The family wishes to thank everyone for all their thoughts and prayers and find comfort in knowing just how many lives Richard touched. In lieu of flowers, donations can be made to Independence Hill Baptist Church, 10220 Independence Hill Road, Huntersville, NC 28078 where they will be put towards some of Richard’s favorite causes. A memorial service will be held at 2pm August 5 at Independence Hill Baptist Church. For those who are unable to attend in person, the service can be viewed at: https://www.facebook.com/groups/109056340640 James Funeral Home of Huntersville is serving the family. www.jamesfuneralhomeLKN.com

Richard Delaine Ferrell, 76 of Huntersville died July 11, 2020. He was born on November 13, 1943 in Mecklenburg County to the late Otis and Essie Ferrell Richard spent most of his career with the Mecklenburg County Police Department, rising... View Obituary & Service Information

The family of Richard Ferrell created this Life Tributes page to make it easy to share your memories.

Send flowers to the Ferrell family.