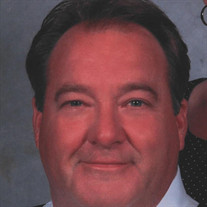 Richard Howard Johnson went home to Jesus on June 18, 2021 at the age of 66, He was born to Bernard and Irene Johnson on October 21, 1954 in Clarksburg, West Virginia. As a child, he had the privilege of growing up in a Christian home, where Jesus wasn’t just taught but was a way of life. He often told the story of being a child and having to attend every church service throughout the week. As a grown man, he was able to thank his parents for their devotion to Jesus and for giving him his Christian foundation. In addition to being a loving husband, father and grandfather, Richard also loved singing Christian music. Throughout his adult life, he held an unwavering faith in God, which he shared with those who surrounded him. He was often afforded the opportunity to share the gospel with local churches and nursing homes throughout the Charlotte area. He also enjoyed an occasional round of golf. Richard met his wife Nancy in 1987 in Bridgeport West Virginia. They were married in Camden New Jersey in November 1990. His work as a Maintenance Supervisor led them to New Bern North Carolina for eleven years and then to the Charlotte area in 2001. Richard joins his Father, Bernard Johnson, his Mother Irene McIntire Johnson Harbert, his sister Jeannie Johnson Muskatell, his stepson Gregory Pitzer, Grandparents McIntire and Johnson along with aunts and uncles in Heaven. He is survived by his wife of 30 years, Nancy Johnson, his first wife, Karen Marra Rieser, his son Ricky Johnson and wife Dee, Granddaughter Marra Rose Johnson, daughter Andrea Johnson Newlon and husband Stephen and grandsons Lucas and Jaxon Newlon. He will be sadly missed by his family, friends and church families at Mallard Creek and Northdale Baptist Churches. A funeral service will be held on Saturday, June 26, 2021, at 12:00 PM, at Mallard Creek Baptist Church in Charlotte, NC. Burial will follow in church cemetery. The family will receive friends on hour prior to the service, 11:00 AM TO 12:00 PM, at the church. Honorary Pallbearers are Louie Bower, Jonny Davis, Ken Griffin, Todd McElroy, Russ Kakaley and Don Warren. Memorials can be made to: Child Evangelism Fellowship, PO Box 339, Matthews, NC 28106. James Funeral Home of Huntersville, NC is serving the family of Mr. Johnson and online condolences can be made to jamesfuneralhomelkn.com.

Richard Howard Johnson went home to Jesus on June 18, 2021 at the age of 66, He was born to Bernard and Irene Johnson on October 21, 1954 in Clarksburg, West Virginia. As a child, he had the privilege of growing up in a Christian home, where... View Obituary & Service Information

The family of Richard Howard Johnson created this Life Tributes page to make it easy to share your memories.

Send flowers to the Johnson family.