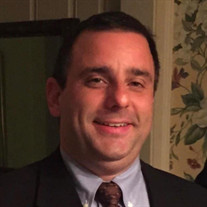 Robert Martin Marra, 49, died unexpectedly on Friday, February 11, 2022 from an apparent heart attack at his home in Huntersville, North Carolina. Born in Lewiston, New York on June 16, 1972, Robert was a devoted son to the late Dr. Joseph Vincent Marra and the late Beverly Anne (Smith) Marra. Spending much of his life in the Niagara Falls area, Robert graduated from Saint Joseph’s Collegiate Institute. He obtained a Bachelor of Science degree from Niagara University and a Juris Doctorate degree from the University of Buffalo. Robert moved to Huntersville, North Carolina in 2011 to be close to his dearest friends, Dr. Catherine Reimels and Dr. Michael Reimels, where he served as Office Manager of their Dental Practice(s). Robert was a beloved son, brother, nephew, uncle and friend. He was a devout Catholic and a wonderful role model for his 21 nephews and nieces. He exuded kindness, generosity and integrity. He had an amazing sense of humor. He dedicated much of his adult life to caring for others; most notably caring for his parents at the end of their lives. He was a favorite uncle who often dropped everything to play with his nephews and nieces and make them gigantic ice cream cones. A great athlete, at just ten years of age he was the calm, cool and collected catcher for his sister, JoAnne Marra-Moll, when she pitched her perfect game in the Whirlpool Little League in 1981. He later became a wonderful golfer; a sport he enjoyed playing with his brothers and his dear uncle, Dr. Orlando A. Marra, throughout his life. One of Robert’s passions was to cook for his friends and family. He spent many, many years at his father’s side mastering family recipes that have been passed down for generations. To his mother’s chagrin, Robert shared his father’s love of horse racing. He could read a racing form better than anyone, and he was the family’s go-to source for tips on any race, but especially the Kentucky Derby. His specialty at the track was “exotic betting”. Robert also leaves behind his longtime companion, Diana Rose Sidey and her daughter Anelle Sidey. In addition to his uncle, Orlando Albert Marra, D.D.S. of Niagara Falls, NY and his aunts, Anna Mae Rotella and Maria Crea-Smith, M.D. both of Lewiston, NY, Robert is survived by his nine siblings; Orlando A. (Marnie) Marra, Esq. of Dunwoody, GA; Catherine E. (Duncan Grant, MD) Marra, Esq. of Charleston, SC; Edward L. (Deanna) Marra, D.M.D. of Scottsdale, AZ; Anne (Michael) Orenstein, Esq. of Hollywood, FL; Joseph V. (Susan) Marra of Lewiston, NY; Judith M. Marra of New York City, NY; Michael J. (Laura) Marra of Lewiston, NY; Maria T. (Erik) Jobson of Orchard Park, NY; and JoAnne M. (Jeffrey) Moll, M.D. of Marble, PA; twenty-one nephews and nieces and countless cousins. A Memorial service will be held on Saturday, February 26, 2022, at 2:00 PM, at James Funeral Home Chapel in Huntersville, NC. There will be a mass held in celebration of Robert’s life on June 18th at Niagara University. In lieu of flowers memorial donations may be made to The ALS Association. James Funeral Home of Huntersville, NC is serving the family of Robert and online condolences can be made to jamesfuneralhomelkn.com

The family of Robert Martin Marra created this Life Tributes page to make it easy to share your memories.

Send flowers to the Marra family.