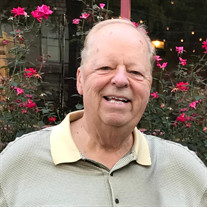 Robert “Bob” F. Reiner, of Mt. Holly, NC passed away at the age of 78 on December 6, 2021 after a courageous battle with cancer. Born in Cleveland, OH in 1943 to the late Bud and Jean Reiner, he graduated from St. Ignatius High School in 1961 and went on to attend the University of Detroit, graduating with a degree in mechanical / aeronautical engineering. He met his future wife, Judy, when he was assigned pickup duty for her and three of her friends for a picnic with his St. Francis fraternity. Bob spent the majority of his career with IBM, retiring after 25 years of service. His retirement was short-lived, as he signed on with IBM business partner Sirius Computer Solutions for another 20 years. He was the consummate Salesman who never met a stranger and was a friend to many. He even won over the nursing team during his latest hospitalization who helped him smuggle Chick-fil-A peppermint shakes. Bob was a loving husband, a proud father of five, and known as “Pa” to his 11 grandchildren – Caroline, Katie, Garrett, Brodie, Graham, Gray, Elsie, Emmett, Camden, Mason & Jaxon – he was always available for a school pick up, but more importantly was an enthusiastic sideline cheerleader for all the kids’ activities. He was an avid reader and his most treasured time was spent on Hilton Head Island, SC relaxing with family and friends. His favorite pastime was watching sports, especially college football and westerns. He was active in his communities, serving on school boards, United Way campaigns, church groups, and most recently served on the Board for NAMI (the National Alliance for Mental Illness) and led their family support groups. Bob is survived by his wife of 55 years, Judy, daughters Teri Massey (Jim), Lynne Challender (Jerry) and Molly Lappen (Brian), sons Chris (Allison) and Tim Reiner, and siblings Don Reiner (Linda), Tom Reiner (Linda), Mary Kay Kelly (Marty), and sister-in-law, Rosie Reiner. He is proceeded in death by his brother Jim Reiner and sister Barbara Klucar. A memorial service will be held at St. Mark’s at a later date. For those unable to attend in person, the funeral service will be live-streamed at: https://www.stmarknc.org/livestream Donations may be made to the Jimmy V Foundation in Bob’s memory: https://vfoundation.donordrive.com/campaign/In-memory-of-Robert--Bob--Reiner James Funeral Home of Huntersville is serving the family.

The family of Robert Reiner created this Life Tributes page to make it easy to share your memories.

Send flowers to the Reiner family.