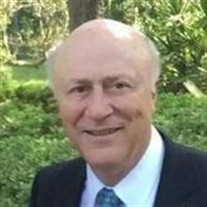 Reverend Dr. Robert Martin Wallace, Jr. died peacefully at home on October 26, 2021. He was 78. First born son of Robert M. Wallace, Sr. and Virginia Byrum Wallace, he was raised in Huntersville and attended North Mecklenburg High School, where he met his sweetheart and wife of 50 years, a very pretty cheerleader named Evelyn "Sissy" Wells. They were married on July 20, 1963 and were by one another's side until her death on September 25, 2013. Bob married Donna-Rae Mason Henry on June 17, 2017 in Hilton Head, SC. They shared a beautiful home together in Bluffton, SC. The last chapter of his life with Miss Donna was filled with love, travel, dancing and culinary adventures until his sudden passing last week. Bob earned his BS Degree from Erskine College in 1965, received his Bachelor of Divinity from Columbia Theological Seminary in 1968, and his Doctor of Ministry degree from Columbia Theological Seminary in 1981. He founded Idlewild Presbyterian Church in Charlotte in 1971 and ministered there until 2004, growing the church from a small group that worshipped together in a school auditorium into a thriving congregation. He became minister at Cocoa Presbyterian Church in Cocoa, FL in 2004 and remained there until retiring in 2011. He served on the board of directors for Bonclarken Assembly Grounds, ARP Retirement Homes, the Charlotte Choral Society and Erskine College and Seminary. Perhaps his proudest achievement was the founding and management of The New Vibrations, a youth choir that, for 30 years, presented concerts throughout the eastern United States and Canada. He truly enjoyed mentoring the young people who were members of the group over its long history, watching them grow into adults with families of their own. He presided over countless weddings of former "New Vibes," and often welcomed the children of former members into the choir, allowing multiple generations to experience the camaraderie and support the group provided. To all former members of The New Vibrations, please rest assured that he not only remembered every one of you, but often had multiple fond stories about you he would tell at Christmas or other family get-togethers. He was known as "Dr. Bob" to the members of his youth group, as "Bob-Bob" to his four grandchildren and five step-grandchildren, and "Dad" to his three sons. Words cannot adequately express the love we all have for this man. He always seemed to know what to say to pick you up when you were down, gave thoughtful and well considered advice, and provided support when it was needed the most. Dad, you will live in our hearts and our memories forever. Robert Martin Wallace, Jr. is survived by his wife, Donna-Rae Henry-Wallace; by his three sons and their families, Robert (Mari and Carter) Wallace; Brian Wallace (Aneta Krawczyk); and Brandon (Melissa, Abbey, Noah and Jude) Wallace; by his stepchildren and their families, Shanna (George, Andrew and Ainsley) Havrilak, and Melissa (Todd, Kyle, Emily and Zach) Ulshafer; by his brother David (Chris) Wallace; sister Alma (TR) Hunter, along with numerous nieces and nephews. He was preceded in death by his wife Sissy Wallace. There will be two Memorial Services honoring the life of Dr. Wallace: Saturday, November 6th at 2:00pm at Lowcountry Presbyterian Church, 10 Simmonsville Road, Bluffton, SC 29910; and Saturday, November 13 at 3:00pm at James Funeral Home at 10520 Arahova Dr, Huntersville, NC 28078. James Funeral Home of Huntersville is serving the family.

The family of Robert Martin Wallace Jr. created this Life Tributes page to make it easy to share your memories.

Send flowers to the Wallace family.