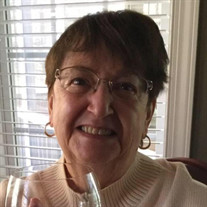 Roberta Elaine Rossi, 81, of Huntersville, North Carolina died on October 9, 2020. Roberta was born in Summit, New Jersey on November 29, 1938 to the late Daniel Rossi and Isabelle M. (DeGiulio) Falzarano. She was raised in Stirling, New Jersey, then moved to Summit, New Jersey where she lived for many years prior to moving to Huntersville, North Carolina. Roberta graduated high school at Mt. St. John Academy in Gladstone, New Jersey. She then attended College of St. Elizabeth in Morristown, New Jersey for one year prior to entering the work force wherein she worked in many different banking and office administration positions. She then founded and operated Community Business Services in Westfield, New Jersey, which she ran successfully for many years. Roberta then went on to working at Schering-Plough in New Jersey for many years until her retirement. Roberta enjoyed traveling the world and spending time with her many family and friends. She also enjoyed her time in the many different organizations she was a member of in both New Jersey and North Carolina. She at one point had served in the position of president of the Business and Professional Women's Foundation (BPW) in New Jersey. Roberta also had enjoyed her time as a member for many years of Altrusa International, Inc. and so many other civic organizations. Some of Roberta's favored hobbies over the years had been boating, spending time with her many friends playing golf, canasta, and on her weekly attendance at the Lake Norman YMCA in Cornelius, North Carolina. Roberta was predeceased by her father, Daniel Rossi, and mother, Isabelle M. (DeGiulio) Falzarano. She was also predeceased by her brother, Daniel "Junior" Rossi and his wife, Ruby Rossi. Roberta is survived by her sister, JoAnn Riola of Huntersville, North Carolina; nieces Patricia A. Riola of Basking Ridge, New Jersey; Lisa (Dario) Stanziola of Fort Mill, South Carolina; nephews Dwayne Rossi of Ormand Beach, Florida; Dean Rossi of Millington, New Jersey; and niece Debbie Rossi of Texas. Roberta is also survived by five great nieces and nephews, Jennifer, Haylee, Michael, Nico and Mia. She is also survived by many loving family members and dear friends throughout the country. In lieu of flowers memorials may be made to the: American Heart Association/American Stroke Association 10 Glenlake Pkwy NE South Tower, Suite 400 Atlanta, GA 30328 Services will be private. James Funeral Home of Huntersville, North Carolina is serving the family.

The family of Roberta Elaine Rossi created this Life Tributes page to make it easy to share your memories.

Send flowers to the Rossi family.