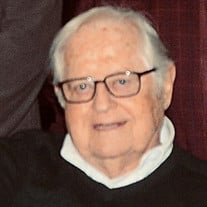 Ronald J Prazmark - Rocket Data Specialist, Entrepreneur, Distinguished Rotarian, Devoted Family Man April 30, 1933 – May 4, 2022 Ron Prazmark, of Williamsville, N.Y., passed away peacefully in Charlotte, N. C. surrounded by his wife and three children. Ron was always at the forefront of new technology and innovation throughout his diverse career. The positions he held at United Technologies Corporation helped launch the Titan IIIC rocket program. That experience in data science led to several positions in the technology field where Ron pioneered the digitization of data, the precursor to today’s wireless data transfer. In the early 1980’s, after a successful sales and marketing venture establishing word processing in Saudi Arabia, he opened the doors to his own business, Buffalo Office Systems and piloted the introduction of word processing, fax, and video conferencing solutions in Western New York until he retired in 2013. Ron was committed to giving back to the community through his work with the Rotary Club of Williamsville and various other charities. He parlayed his business skills to create successful new ways of fundraising to give to organizations in need. As a Rotary President, he developed a Youth Mentoring program in local schools. His accomplishments as a Rotarian earned him the prestigious Paul Harris Fellow award in appreciation for contributions made. An avid Buffalo Bills fan since the team’s debut in 1947 and a season ticket holder for a decade, Ron inspired his children, grandchildren, and great-grandchildren to don Bills gear every Sunday. He also accomplished his goal of visiting all 50 states. Ron enjoyed interacting with new people and maintaining his lifelong friendships he made at Canisius High School and Canisius College and continued to keep in touch with many of his classmates until the day he passed. Ron is survived by his wife of 69 years, Phyllis, his son Robert, daughters Jeanne (Paul) Kersten and Paula (John) Moore, 9 grandchildren, 4 great-grandsons, and sister, Ellen Levea. He was preceded in death by his sister, Marcia Gambino. A Mass of Christian Burial will be held on May 9th at 1:00 pm EDT at St. Mark’s Church in Huntersville, N.C. (Mass will be live streamed - https://www.stmarknc.org/livestream#MassSchedule) Ron will return to Buffalo and his final resting place at Forest Lawn / Lakeside Cemetery in Hamburg, N.Y. To send online condolences and link to the Mass live stream visit www.jamesfuneralhomelkn.com. In lieu of flowers, memorial contributions may be made to the charity of your choice.

The family of Ronald Prazmark created this Life Tributes page to make it easy to share your memories.

Customized sympathy cards. Mailed for you.