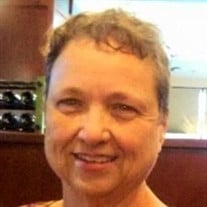 Huntersville--Sandra "Sandy" Kaye Boyer Barnes, 70 of China Grove, NC, formerly of Polk, PA passed away unexpectedly Thursday, October 29, 2020 as a result of injuries she received in an automobile accident on October 20, 2020. She was lovingly cared for by Harris Hospice at Presbyterian Hospital in Charlotte, NC during this time. Born on March 5, 1950 in Pennsylvania she was the daughter of Orville Dale and Martha "Lib" Elizabeth Hendrick Boyer. Sandy was a 1968 graduate of Franklin High School and a 1972 graduate of Allegheny College. After graduating college, Sandy began her career at Polk State Center where she met her husband Robert E. Barnes. They were married November 24, 1973 until his passing October 14, 2002. In her later years she helped many people as a Christian Counselor. Sandy was a member of the Polk United Methodist Church. Sandy enjoyed genealogy and was referred to as the family historian. She loved animals, especially her dog Sadie and the peacocks she raised on her farm. She was an avid swimmer her entire life despite being paralyzed 44 years ago. Sandy had a sharp intellect and a strong voice and never hesitated to advocate for herself and others. It was often said of Sandy that she was ‘the strongest woman I ever met.’ Sandy is survived by her only child, Kelly Renee Barnes Karns, with whom she shared an especially close blond. Both were looking forward to passing the years together with the recent purchase of a small farm. Together they had hoped to continue raising peacocks, sharing their love of animals, and enjoying each others company. Her greatest joy came when Kelly blessed Sandy with her only grandson and light of her life in 2003, Nolan Abram Robert Karns, both of Cornelius, NC. In addition to her parents, she was preceded in death by her husband, Robert “Bob” Eugene Barnes; step-father, Julius Welms, sister, Ruth Steenburg, brother-in-law, William “Bill” Barnes, and sister-in-law Barbara Booher. She is survived by a sister Marian Mahoney, a sister Marti Chasler and husband Colin, a brother Ron Boyer, and a brother Bob Boyer and wife Leslie. She is also survived by sister-in-law Suzanne Hores and husband Edward and sister-in-law Nancy Barnes. Also surviving is Maggie Smith Voorhees, whom Sandy referred to as her honorable 2nd daughter. Further left to cherish her memory are several nieces, nephews, grandnieces, grandnephews, many special cousins and friends. A celebration of life will take place in Pennsylvania during summer of 2021. Sandy will be laid to rest at Old Sandy Cemetery, Polk, PA with her husband Robert E. Barnes. Memorial contributions can be directed to the college fund for her grandson, Nolan Karns, in care of the family. Kelly Karns 1075 Millbridge Road, China Grove, NC 28023. James Funeral Home of Huntersville is serving the family.

Huntersville--Sandra "Sandy" Kaye Boyer Barnes, 70 of China Grove, NC, formerly of Polk, PA passed away unexpectedly Thursday, October 29, 2020 as a result of injuries she received in an automobile accident on October 20, 2020. She was lovingly... View Obituary & Service Information

The family of Sandra Barnes created this Life Tributes page to make it easy to share your memories.

Send flowers to the Barnes family.