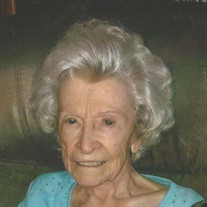 Sena Melton Morgan October 6, 1921 – January 10, 2022 Mrs. Sena Morgan, 100, of Stone Mountain, GA passed away Monday, January 10, 2022. Sena was born in Columbia, SC to Joseph and Mary Bruce Cannon. She was the sixth of seven children, Joe, Mary, Bruce, Dan, Margaret, and Gene, all of whom preceded her in death. Sena moved to Gainesville, FL after the death of her parents in 1937 and was adopted by her aunt and uncle, Vi and Aubrey Melton. She graduated from Gainesville High School and worked for her dad at Melton Motors during the WWII years. Sena learned to fly and was offered a commission in the Women’s Air Corps, which she declined to continue to help her parents’ business. In 1948, Sena met and married Paris Morgan (Mike) while he was a student at the University of Florida. They moved to Jacksonville and had three children. Sena and Mike later moved to Atlanta where she sold real estate and helped Mike with his wire and cable agency. They were active members at St. Michaels and All Angels church in Stone Mountain and the Atlanta Model A club. They enjoyed traveling and spent many weekends at Lake Asbury in Florida. Sena was the beloved grandmother of six grandchildren and two great grandchildren. She loved to fish and garden and always enjoyed spending time with her family. Sena was always ready with a home cooked meal, a fun story, and her great sense of humor. After Mike’s death in 2016, Sena continued to stay at home with her grandson Greg in Stone Mountain until advanced age led her to live with her daughter and son-in-law in North Carolina. Sena is survived by her children; Glenn Morgan of Jacksonville, FL; Scott Morgan (Susan) of Hudson, FL; Janet Morgan Cheek (Tom) of Denver, NC, grandchildren; Greg, Brent, Glenn Jr., Brandon, Vanessa, Leslie, great grandchildren; David and Zeke, and many loving nieces and nephews. A Memorial service will be held later this year. In lieu of flowers, memorial contributions may be made to Hospice & Palliative Care Lincoln County, 900 Dontia Drive, Lincolnton, NC 28092. James Funeral Home is assisting the family, online condolences at www.jamesfuneralhomelkn.com.

The family of Sena Morgan created this Life Tributes page to make it easy to share your memories.

Send flowers to the Morgan family.