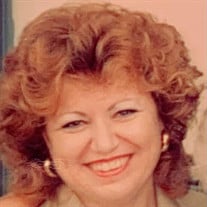 Shelia Ann "Shan" Maxwell Hudson, of Charlotte, died on February 9, 2021 aged 75. Shan was born on December 28, 1945 in Conway, South Carolina to "Mack" and Clara Maxwell. Shan was the mother of three sons Rob, Tim, and Scott; seven grandchildren Kyle, Zach, Ben, Alex, Savannah, Ashleigh, and Chris; and four great-grandchildren Emma, Elijah, Elliott, and Eleanor. She also has two daughters-in-law Susan and Karen, two grandson's wives Megan and Carolynn, two sisters Judy and Nancy, and two brothers Ken and Tink. Family and friends knew Shan's love for laughing, cooking, and her passion of "coastal life" where she lived and worked during the happiest years of her life. It was typical to find Shan dancing barefoot around the house to her favorite oldies music or cruising up and down the beach boulevard letting the sounds and smells of the ocean sweep through the open windows of her SUV. She recently described one of the happiest days of her life as a few lazy hours spent sitting with her sister Judy and brother-in-law Rex watching the fisihing boats cruise through Murrells Inlet on a Carolina blue-sky afternoon. Shan was fortunate to be able to travel and she visited destinations in Europe, Asia, the Carribean, and Mexico with her family. Shan's other loves included her family, talking to her sister Judy daily, eating seafood, eating more seafood, working in her craft room, and watching her favorite TV shows which included Jeopardy, The Big Bang Theory, and The Closer. The family would like to express their gratitude to the many members of the medical community who cared for Shan over the years. Specifically the Novant Health team including Dr. Eagle, Cassie, Michelle, Brigida, Ashley, Ritchie, Alex, Tania, and Dana; the Kindred team including Grant, Tidelands Health including Dr. Milling, and Huntersville Health and Rehab, including Hunter. The family would also like to express their to gratitude to Duke Energy for their overwhelming support and flexibility in allowing Shan's son to balance the needs of caring for her with his work responsibilities and to Scott Hurston for his devoted friendship to Shan for nearly 30 years. Funeral arrangements are being handled by James's Funeral Home of Huntersville, NC. Shan desired for her ashes to be scattered at sea. In lieu of flowers, memorial contributions can be made anonymously to St. Jude Childrens' Hospital.

The family of Shelia Hudson created this Life Tributes page to make it easy to share your memories.

Send flowers to the Hudson family.