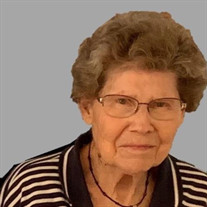 Shirley Beaty Goodrum, 85, of Stanley, much-loved mother, sister, grandmother, great-grandmother, neighbor, and friend went to be with the Lord Wednesday, April 14, 2021. A celebration of her life will be held at Sunset Road Baptist Church, Charlotte, at 11:00 a.m. on Tuesday, April 20, 2021. The family will greet friends at the church following the service. Born in North Belmont, NC on August 9, 1935, to the late Carl and Edna Beaty, Shirley delighted in her cotton-mill community roots she remembered as “pretty girl station.” Educated in the mill villages of Gaston County, she graduated from North Belmont in 1953. Confident in her identity forged from humble roots, and armored with the values of faith, commitment, and integrity, Shirley enjoyed a blessed life with her soul mate of 61 years, James. Together they raised three children and structured their lives around hard work, frugality, and their church community. Inspired by her love of high school chemistry, Shirley enjoyed her career as a lab technician with the Mecklenburg County Health Department, where she worked for over 30 years before retiring in 1997. In retirement she never slowed down—always doing, giving, serving, and connecting with family, friends, and delightful neighbors. For nearly six decades, Shirley was an active member and leader at Sunset Road Baptist Church. She participated in all facets of church life, and particularly delighted in teaching youth and children’s Sunday School, a responsibility she continued through her 85th year. Shirley also had a deep passion for missions and helping those most challenged by life. She was at her best when finding ways to serve others and be useful! While Shirley’s determination and insistence often spurred others to action, her sincerity, commitment, and servant leadership always inspired others to join her. Shirley is survived by one daughter and two sons, Janet Goodrum Hudson (Lacy Ford) of Columbia, SC; James David Goodrum (Kim) of Cornelius, NC and Gary Neal Goodrum of Charlotte; four grandchildren, Travis Dale Hudson (Janet), Sonya Hudson Sonneman (Janet); Jared David Goodrum (David); Heather Brooke Goodrum (David); three great grandchildren, Michelle Becerra and Emma Rose Hudson (Travis); Calvin James Sonneman (Sonya); sister, Peggy Beaty Rankin (Joe); sister-in-law Martha Goodrum Kerns; many cousins, nieces and nephews. She was preceded in death by her husband of 61 years, James Wallace Goodrum, who she missed dearly these last 2 years; brother, Floyd Beaty; and brother-in-law, Harold Kerns. Memorials may be made to Sunset Road Baptist Church, 2317 Sunset Road, Charlotte, NC 28216 or the charity of your choice. The family thanks and expresses its appreciation to Novant Harris Hospice as well as family and friends who offered loving support through her most challenging experience with ovarian cancer. Online condolences at www.jamesfuneralhomelkn.com.

Shirley Beaty Goodrum, 85, of Stanley, much-loved mother, sister, grandmother, great-grandmother, neighbor, and friend went to be with the Lord Wednesday, April 14, 2021. A celebration of her life will be held at Sunset Road Baptist Church,... View Obituary & Service Information

The family of Shirley Beaty Goodrum created this Life Tributes page to make it easy to share your memories.

Send flowers to the Goodrum family.