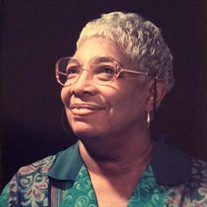 Sina Esther Tinsley Rhyne, 86 of Lebanon, Tennessee went to be with the Lord on December 27, 2020. She was born in Eden, NC on April 4, 1934 to the late Eugene and Sina Tinsley. Esther attended schools in Eden, North Carolina, graduating from Douglass High School in 1950. She married Henry Rhyne after a long courtship. The family moved to Washington. DC. As a mother and grandmother, she was very special, doing whatever she could to help her children and grandchildren prosper. For years, Esther worked as a household worker to make others comfortable. Continuing with a committed and positive work ethic, she worked at the US Post Office. After many years, she retired from that job. Esther loved to entertain family and friends, often cooking and having parties on holidays and weekends. Everyone was welcome to her home. In her later years, Esther joined and became a faithful member of churches in the Maryland and Georgia areas. She was an active member of the choirs and participated in the different activities of these churches. Because of her spiritual beliefs, she fought the good fight in her battle against Parkinson’s disease. She is preceded in death by her husband Henry Rhyne; three sisters, Harrison, Lydia, and Quecelle; and two brothers, Eugene and Johnny. Survivors include her son Kenneth Tinsley (Ingrid) of Alexandria, Virginia; Robin Fielder of Lebanon, Tennessee; three grandchildren, Melissa Fielder Copeland (Stanley), Justin Fielder, and Isabella Tinsley; one great-grandchild, Christopher Piner, Jr.; sister-in-law Gladys Tinsley; and a special host of nieces, nephews, cousins, and friends. The family of Sina Esther Tinsley Rhyne wishes to thank you and acknowledge with great appreciation your kindness during her times of illness and passing. It is during this time of sorrow we have learned how much our friends mean to us. Your kindness and sympathy will always be remembered. The funeral service will be held at 11:30 AM Friday, January 8 at James Funeral Home. Visitation will be 10:30-11:30 prior. Burial will follow at Gethsemane Memorial Gardens. For those unable to attend in person, the funeral service will be streamed at 11:30am online at: https://www.facebook.com/JamesFuneralHome/ James Funeral Home of Huntersville is serving the family.

Sina Esther Tinsley Rhyne, 86 of Lebanon, Tennessee went to be with the Lord on December 27, 2020. She was born in Eden, NC on April 4, 1934 to the late Eugene and Sina Tinsley. Esther attended schools in Eden, North Carolina, graduating from... View Obituary & Service Information

The family of Sina Esther Rhyne created this Life Tributes page to make it easy to share your memories.

Sina Esther Tinsley Rhyne, 86 of Lebanon, Tennessee went to be...

Send flowers to the Rhyne family.