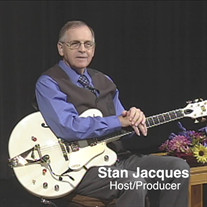 Stanley "Stan" Mitchell Jacques, 76 of Charlotte went to be with the Lord on April 21, 2021. He was born on May 9, 1944 in Iredell County to Ethel "Dot" Jacks and the late Emmett Homer Jacks. Survivors include his partner, Donna Dye; mother, Dot Jacks; and brother Tom Jacques (wife Colleen, Tom's daughters Heather and Haley Jacques), Fay Jacques (sister-in-law), niece Debbie Rhea (Wesley) and nephew Greg Jacques. Stan was predeceased in death by his brother, Jerry Jacques. Stan has had many careers and hobbies in his lifetime. He was a Mechanical/Electrical Engineering Designer for 15 plus years which included working at a Naval Shipyard in Virginia. At H. L. Yoh Central Technical Services, he provided power and lighting design for churches, hospitals, military bases and office buildings. Mechanical projects included designing parts for spinning machines and Kevlar machines as well as many others. He was a Licensed Insurance Agent for American Family Life. Was employed at Bi-Lo as head cashier, front end manager and translated for Spanish Speaking customers. Also included in his many ventures, he was a Purchasing Manager and Assembler/Installer for custom built PCs. Most people will recognize Stan for his musical careers and endeavors. At CPCC, he was a guitar instructor for 10 years, but also taught privately for over 50 years. This included several music studios/stores in the Charlotte area and The Jacques Studio. Stan played guitar with several Pop/Rock band and was a vocalist as well. He had 43 years experience as solo Guitar/Vocalist. It has been said by many of his students that not only were music lessons taught, but life lessons were imparted to them. "Carolina Entertainment" on TV21Acess was hosted and produced by Stan for over 30 years as a way of introducing many local and national artists to this area. He was volunteered in the studio and shared wisdom and knowledge to "newbies" who were just beginning. He helped many of the other producers as we became like family for many years. His camera and photography skills were superb and some of the candid shots at events were astounding. He had so many stories and jokes which would just captivate folks. Humor was so much a part of his life. When asked how he would like to be remember, he said "Teacher, Musician, Friend". That pretty much sums up who he was. A person could not ask for a finer friend who would be there for you anytime, night or day. He would tell people, he would be available "24/7" and what an example he lived. He truly had no idea the impact he left on people's lives and was just starting to believe that his time here was so important. Memorials may be made to Hunter Acres Baptist Church. The funeral service will be held at 11 AM Thursday, April 29 at Hunter Acres Baptist Church. Visitation will be one hour prior at the church. There will be a separate graveside service at Iredell Memorial Cemetery in Statesville, NC at a later date. James Funeral Home of Huntersville is serving the family.

Stanley "Stan" Mitchell Jacques, 76 of Charlotte went to be with the Lord on April 21, 2021. He was born on May 9, 1944 in Iredell County to Ethel "Dot" Jacks and the late Emmett Homer Jacks. Survivors include his partner, Donna Dye; mother,... View Obituary & Service Information

The family of Stan Jacques created this Life Tributes page to make it easy to share your memories.

Stanley &quot;Stan&quot; Mitchell Jacques, 76 of Charlotte went to be with...

Send flowers to the Jacques family.