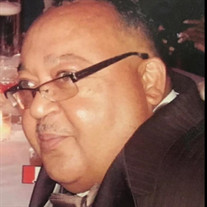 Stephen Leon Fripps, affectionally known as “Butch,” age 72, of Huntersville, NC died May 8, 2022. He was born on January 8, 1950 in Philadelphia, PA to the late Carlos Galbraith and Marjorie Fripps. In 1969, he graduated from Benjamin Franklin High School of Philadelphia. In recognition of his academics, he was awarded a full Art Scholarship to a local University in Philadelphia. Rather, he chose to serve in the US Army. There he served as a cook where he developed a passion for cooking. After his discharge from the Army, he pursued a career with the US Postal Service. There he worked for 32-years. In 2006, Butch relocated to North Carolina. He was an avid Philadelphia Eagles and Seventy Sixers fan; he loved his hometown teams. He enjoyed spending time with family, cooking, watching sports, listening to oldies music while sitting on his back porch reminiscing about “back in the day,” when he outswam all opponents that dared to challenge him to a swim race. He loved to tell stories to his grandchildren about his glory days and always made certain to send them home with a go-bag full of candy. A few of Butch’s prized possessions were his Dodge Ram Pickup Truck and his two chihuahuas, Queen and Chip who could be seen following his every move around the house. He is preceded in death by his son Carlos Fripps, his brothers Karl Higginbotham, Charles Fripps, and Gerald Fripps Sr; his sisters Majorie Fripps, Elizabeth Gavin, Marian Norfleet, and his twin sister Sharon Nixon. Survivors include his wife Christine Fripps; sons, Stephen L. Fripps, Jr. and Richard James Lucas; daughters, Sonya Nacole Fripps and Crystal Dawn Pinkett; son-in law, Tyree M. Pinkett Sr.; siblings, Gloria Jean Whitaker and Robert Fripps Sr.; grandchildren, Ashley Fripps, Stephen Pharr, Stephanie (Shay-Shay) Fripps, Asya Fripps, Tyree M. Pinkett II, Nasir Pinkett, Cameron Pinkett, Richard Childs, Harold Williams, Donte Hickson Lucas, Trenton Fripps-Stone, and Khalil Fripps. The funeral service will be held at 3 PM Sunday, May 15 at James Funeral Home. Visitation will be 2-3 PM prior. The funeral will be livestreamed at facebook.com/jamesfuneralhome. Burial with military honors will be private at Salisbury National Cemetery. James Funeral Home of Huntersville is serving the family.

The family of Stephen Leon Fripps created this Life Tributes page to make it easy to share your memories.

Send flowers to the Fripps family.