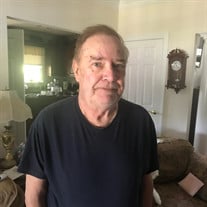 Steven Jay Wise, 67, of Kannapolis, NC. passed away on March 18, 2022, following a period of declining health. Steve was born July 8, 1954, in Rowan County, the son of Jay V. Wise of Winston-Salem and the late Barbara T. Wise. Winston-Salem was home to Steve in his early years, graduating from R. J. Reynolds High School in 1972. He continued his studies and received his BS Degree in Speech Communications/Minor in English from Appalachian State University in 1979. His interest in journalism and broadcasting led him to employment opportunities with WXII, Piedmont Airlines, and various positions in the Security field. Steve made his permanent home in Kannapolis, NC, where his parents grew up and his family resided. Although humble and quiet about it, he was a gifted writer and artist. He had a passion for music and history and collected impressive memorabilia throughout his lifetime. Steve is survived by his father, Jay V. Wise of Winston-Salem, sisters Sandra (Johnny) Suggs, Clemmons, NC., Karen (Robin) Helms, Huntersville, NC., nephew Jake (Sheila) Helms, and nieces Taylor (Nathan) Stamey, Kelsey (Garrett) Robinson, and Megan Suggs. The family would like to thank James Funeral Home in Huntersville, NC for their compassion and care for Steve and the family during this difficult time. In accordance with Steve's wishes, services will be private. Online condolences may be made at www.jamesfuneralhomelkn.com. James Funeral Home of Huntersville is serving the family.

The family of Steve Wise created this Life Tributes page to make it easy to share your memories.

Send flowers to the Wise family.