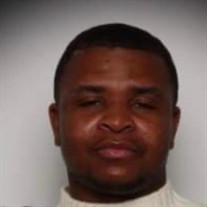 Sumpter Lamont Bass was born on September 3, 1979 in Charlotte, NC. He departed his life on Monday December 20, 2021 at home surrounded by his close family and friends. Lamont graduated from Providence High School in Charlotte, NC and went on to Catawba College to study Sports Management. During his school career he was an avid football and baseball player. He was one of the biggest Dallas Cowboy and Duke fans you would ever want to meet. Lamont would never turn down a good game of spades and didn’t mind hitting the lanes on Sunday for a skillful game of bowling. Anybody that knew Lamont knows that his most favorite places were on the back of his lawnmower and with his family. Lamont was the sole proprietor of “Kut N Edge” Lawn Service where he built his business from the ground up and served hundreds of customers across Charlotte and surrounding areas. During his down time, Lamont mentored young boys in his neighborhood helping to keep them off of the streets and out of trouble. He even mentored the rap star Da Baby who took time out of his busy schedule to come and visit him during his illness. Lamont was preceded in death by his father Sumpter Wright Bass, grandfather Dino Sanders, grandparents Phillip and Leola Bass, aunt Louise Murphy and nephew Christopher Cathey. He leaves to cherish his memories: his wife of 20 years, April Bass; their children Cierra Butler of Midland, NC and Cameron Bass of Charlotte, NC; his mother Gloria Bass Mackey of Charlotte, NC; grandmother Lizzie Sanders of Charlotte, NC; two brothers Surron Bass and Satchel Bass both of Charlotte, NC; two sisters Laguanda Fleming of St. Parrish, Fl and Donna Williams of Charlotte, NC; aunt Judy Thompson (Meme Thompson) of Charlotte, NC; two uncles Willie Smith and Eugene Smith both of Charlotte, NC; Father and Mother in law Ronald and Yvonne McDowell of Charlotte, NC, sister -in-law Shannon Steele of Charlotte, NC; nephew Jaedyn Steele of Charlotte, NC; and Nieces Jaeda Steele and Emerson Bass both of Charlotte, NC; Godson Reuben Madiah of Charlotte, NC and a host of loving cousins and friends. Viewing will be held from 12 p.m. until 2 p.m. with funeral service starting at 2 p.m. Monday, December 27 at James Funeral Home. A repass will be held following at James Funeral Home Community Room. Online condolences may be made at www.jamesfuneralhomelkn.com.

Sumpter Lamont Bass was born on September 3, 1979 in Charlotte, NC. He departed his life on Monday December 20, 2021 at home surrounded by his close family and friends. Lamont graduated from Providence High School in Charlotte, NC and went... View Obituary & Service Information

The family of Sumpter Bass created this Life Tributes page to make it easy to share your memories.

Send flowers to the Bass family.