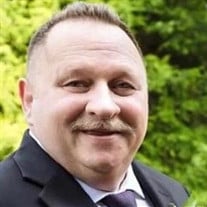 Terry James Robichaud, (61), of Denver, North Carolina passed away peacefully on June 9, 2022. Terry Robichaud was born on August 31st 1960 in Fort Wayne, IN to Walter Robichaud and the late Marvelle Robichaud. The definition of a Renaissance man, Terry (aka Robo) embraced many aspects of life, from singing in choir, to participating in the Boy Scouts and the student council, to a variety of sports including wrestling, track and cheerleading. But Terry’s true passion was his love of football, which began at his alma mater, Ben Davis High School (Class of 1979), and continued at St. Joseph College (Class of 1983). Known for his super strong bear hugs, Terry loved his family dearly. Terry married his college sweetheart, Donna (Riffle) Robichaud on August 13, 1983 and raised two daughters, Mindy Lynn Robichaud-McClure and Samantha Marie Robichaud. As someone who was always the life of the party, Terry’s hospitality drew friends and guests from across the country (and around the world). For over 30 years, he and his friends would make a yearly pilgrimage to the Indianapolis 500, and his famous Super Bowl and 4th of July parties at the Robo Estates were always ones to remember. And if a party guest got thirsty, his well-stocked basement bar was always open for a shot of bourbon. Terry is survived by his wife, Donna, and children, Samantha and Mindy (Doug); father Walter J. Robichaud; sisters Rochelle (Paul) Hankins and Renee Whitaker; his 3 nieces, 4 nephews and their families. A celebration of life will be held at 1:00 pm to 4:00 pm, Sunday, June 19, 2022 at the American Legion in Brownsburg, Indiana (636 E Main St. Brownsburg, IN 46112). Terry described the Ben Davis football program as the program that changed his life. Donations made to Terry’s Memorial Page (https://everloved.com/life-of/terry-robichaud/?flow=201) will be given to the Ben Davis Dads' Club to support the love of football for other young people in Terry's memory. James Funeral Home is serving the family.

Terry James Robichaud, (61), of Denver, North Carolina passed away peacefully on June 9, 2022. Terry Robichaud was born on August 31st 1960 in Fort Wayne, IN to Walter Robichaud and the late Marvelle Robichaud. The definition of a Renaissance... View Obituary & Service Information

The family of Terry James Robichaud created this Life Tributes page to make it easy to share your memories.

Send flowers to the Robichaud family.