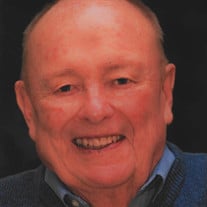 Vincent Francis Kuhn, 82, of Cornelius, passed away February 7, 2021. Born and raised in Watkins Glen, NY, “Bud” worked for IBM for 35 years. He married Judith Paul, from New Hampshire, in 1962, and raised four children in Apalachin, NY until transferring to Charlotte, NC in 1979. Upon retirement, Vince and Judy moved to Cornelius, NC where he was a golfer and member of Cowans Ford County Club. Both were faithful founding members of St. Marks Catholic Church. Vince is survived by his wife of 58 years, Judy; his brother, James, of Florida; his four children, their spouses, and ten grandchildren: Susan and Richard, and Andy, Samantha and Amy Chui of New York City; Stephen and Shelly, and Alec, Tyler and Sarah Kate Kuhn of Lake Wylie; Paul and Margaret, and John and Joseph Kuhn of Huntersville; and Nancy and Kevin, and Haley and Avery Rudolph of Raleigh. His heart, humor and happiness lives on in them. The family would like to thank Todd and Charlotte Westmoreland for years of friendship and support. The funeral mass will be held on Wednesday, February 10, 11:00 AM, at St. Mark Catholic Church in Huntersville. The inurnment will be on Thursday, February 11, 1:00 PM at Northlake Memorial Gardens in Huntersville. James Funeral Home, of Huntersville, is serving the family.

The family of Vincent Kuhn Jr. created this Life Tributes page to make it easy to share your memories.