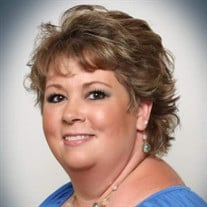 Virginia (Lori) Parker Dowell Lori Dowell, 55, of Charlotte passed away after battling COVID-19 on November 28th 2021 at Novant Medical in Huntersville, NC. A native of the Charlotte area, she was born February 2,1966, to Charles Jack Parker and Harriet Holmes Parker. Lori graduated from North Mecklenburg class of 1984. She then pursued an Associates Degree that she would later abandon for something she loved more, her family. Lori devoted nearly half of her life to her marriage, during which she raised her four children. She would go on to adopt her granddaughter and raise her for 13 wonderful years. In her early years, Lori, enjoyed interior design, painting murals, sewing, sales, designing kitchens and crafting. She did everything she could to do right by her children. When tasked with motherhood once more, she strived to be even better. In later years she enjoyed nothing more than to be surrounded by her grandchildren. She had an amazing vision when bringing objects together, a beautiful way with words, and her ability to love immensely goes beyond its definition. She was preceded into Heaven by her mother, Harriet Parker; her son, Brandon Dowell; and her unborn Grandson, “Peanut.” Lori is survived by her father, Charles J. Parker of Charlotte, NC; brothers Charles Parker (Sandy) and Stephen Parker, of Charlotte, NC; son Dave Dowell (Barbara) of Shelby, NC; daughters Cecilia Loran (Shawn) of Conyers, GA, Kathryn Dowell (Chris Smith) of Mooresville, NC; Daughter-in-law Christian Anthony of Mooresville, NC; Daughter and granddaughter Megan Dowell of Conyers, GA; Grandchildren: Landon Dowell, Braydon Dowell, Alaric Loran, Toree Dowell, Grayson Dowell, Haylee Dowell and her many extended family and friends she was surrounded by during her lifetime. In lieu of flowers, memorials may be made to the National Pancreas Foundation at https://pancreasfoundation.org/ Services and other details to be announced by family.

Virginia (Lori) Parker Dowell Lori Dowell, 55, of Charlotte passed away after battling COVID-19 on November 28th 2021 at Novant Medical in Huntersville, NC. A native of the Charlotte area, she was born February 2,1966, to Charles Jack Parker... View Obituary & Service Information

The family of Virginia "Lori" Parker Dowell created this Life Tributes page to make it easy to share your memories.

Send flowers to the Dowell family.