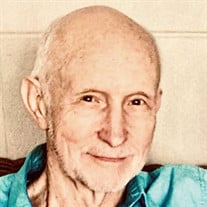 Walter Ronald Leigh (Ron), age 84 of Huntersville NC passed away on June 4, 2021, due to complications from Alzheimer’s Disease. He was born on August 15, 1936, to the late Walter William and Martha Blanton Leigh. Dad grew up in Shelby, NC attended Cleveland County Public schools and graduated from Shelby High School. He proudly served two years in the U.S. Army where he was stationed in Germany. Upon his return to civilian life Dad met the love of his life, Helen Marie Thomas, on a blind date in February 1959; they were married June 5, 1959. Dad and his bride quickly started a family while he pursued an associate degree from Gardner Webb College and worked full time for Shelby Supply Company. Dad enjoyed a highly successful career in industrial transmission sales and eventually formed his own sales representative company, RPM Products, Inc. Upon his retirement in 2006 Dad enjoyed extensive travels, both domestic and abroad with his beloved wife. In addition to travel Dad loved singing, playing his guitar, golf, and spending time with family and friends. Dad was quick witted and delighted in telling jokes to anyone who would lend an ear. He was also a man of deep faith, serving in various capacities at several different churches throughout his life. As his health rapidly declined over the past few months, each of his caregivers spoke about his sweet nature and how much they enjoyed caring for him. Dad was a true gentleman who is often described as generous, honorable, friendly, and intelligent. He had a warm and inviting smile that made you feel welcome to be in his presence; he will be missed by many. In addition to his parents, Dad was predeceased by siblings Rebecca Leigh Weaver, Maxine Leigh Wood and David Lane Leigh. Those left to cherish his memory include his wife, Helen; son Wally Leigh (Nancy), daughters Angela Ranson (Randy) and Susan Andrews (Chris). His four grandchildren, Sarah Leigh (Bryan Olson), Sam Leigh (Ellie), Jacob Ranson and Mack Ranson; four great-grandchildren; Milo, Owen, Levi, and Ava; a fifth great-grandchild is due in August. He is also survived by his sister Anita Davis (Paul), brothers Faron Leigh; Kevin Leigh (Edie), sister-in-law Sharon Leigh, brother-in-law David Thomas (Sandra) and sister-in-law Hilda Thomas Conville (Pat) as well as a host of adoring nieces and nephews. The family is eternally grateful to the staff of Carolina Caring Sherrill’s Ford Hospice for the loving and excellent care they administered to Dad. The family would also like to express heartfelt thanks to the following medical professionals that were truly “God sends” as Dad’s health declined: Anita, Christy, and Jacqueline of Carolina Caring Home Hospice; Visiting Angels of Huntersville, especially our personal angel, Robin. In lieu of flowers, please consider a donation to Carolina Caring Sherrill’s Ford Hospice House, 7473 Sherrills Ford Rd. Ste A, Sherrills Ford, NC 28673 or online at www.carolinacaring.org/give. James Funeral Home of Huntersville NC is assisting the family. A celebration of Ron's life will be held August 14, 2021, 2:00 PM, James Funeral Home, 10520 Arahova Drive, Huntersville NC 28078. A catered reception will follow in the James Funeral Home Community Room. Online condolences at www.jamesfuneralhomelkn.com.

Walter Ronald Leigh (Ron), age 84 of Huntersville NC passed away on June 4, 2021, due to complications from Alzheimer&#8217;s Disease. He was born on August 15, 1936, to the late Walter William and Martha Blanton Leigh. Dad grew up in Shelby,... View Obituary & Service Information

The family of Walter "Ron" Leigh created this Life Tributes page to make it easy to share your memories.

Send flowers to the Leigh family.