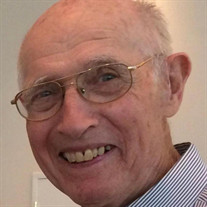 William E. (Bill) Morrison of Davidson, NC, died on Saturday September 19 at age 94. He was the much-loved, respected, and doting father of William Emerson Morrison, Jr. of Charlotte and John Howell Morrison of Medford, MA. In addition to his sons, Bill is survived by grandchild Ezra James Montgomery Morrison, daughter-in-law Vivian Montgomery, both of Massachusetts, and daughter-in-law Wanda Morrison of Charlotte. He was preceded in death by his wife of 62 years, Emmy Howell Morrison and his five older siblings. Bill was born in 1926 on the Morrison's Cabarrus County dairy farm. The family traces their local roots to the mid 1700s. As a teenager during WWII he took on his three older brothers' farm work while they served in the military. Before marrying Emmy in 1952 and starting a family, Bill harvested trees on his farm, had them milled into lumber and used it to build their first home. Bill continued dairy farming into adulthood until beginning his career at Sealtest Dairy. There he moved into sales management for Kraft Foods and retired 35 years later having spent his life in all aspects of the dairy business. He singlehandedly transplanted many trees and moved large rocks while landscaping his portion of the original Morrison Farm and later his Davidson home. No excuse deterred him from accomplishing a task, especially any of Emmy's many gardening projects. Their Heritage Rose Garden gained regional acclaim, and the community admired the brick English herb garden he built for Emmys birthday. Even in his later years, he could be found on the roof fixing a gutter, or in a tree pruning a worrisome limb. Always busy, he nevertheless made time to ask the probing questions and ponder the larger life issues in a way that said, "I'm interested, I hear you." He was affectionately known to his family as the "Iron Man" because he never complained of being tired and originated the saying, "hard weather makes good wood." Bill continued making friends during the past two and one half years at The Laurels at Highland Creek. Bill had an unwavering lifetime commitment to the church. He served as a Deacon and an Elder for both Gilwood Presbyterian, his boyhood Church, and Davidson College Presbyterian Church where he was a member since 1964. Bill had a strong sense of what mattered - honesty, friendship, action, nurturing, positivity, devotion and restraint. Those who spent time with Bill never heard him say anything mean or disrespectful about anyone. His gentle, gregarious, genuine character won over all who knew him. It is a rare achievement indeed to leave the world with no enemies, but Bill made that look easy. Please make a generous donation to the cause of your choice in Bill’s name. A memorial service will be held post Covid-19. Please contact [email protected] to be notified of arrangements. James Funeral Home of Huntersville is serving the family.

William E. (Bill) Morrison of Davidson, NC, died on Saturday September 19 at age 94. He was the much-loved, respected, and doting father of William Emerson Morrison, Jr. of Charlotte and John Howell Morrison of Medford, MA. In addition to his... View Obituary & Service Information

The family of William Morrison created this Life Tributes page to make it easy to share your memories.

Send flowers to the Morrison family.