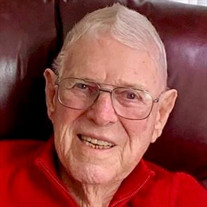 DAVIDSON – Winfred R. Ervin (“Win”) died at his home on April 1, 2022, a week following the celebration of his 95th birthday. Born March 25, 1927 in Asheville, NC to a United Methodist Church minister, the Rev. M.G. Ervin and wife, Elizabeth Williams Ervin, his early childhood was spent in Davie County, moving to Charlotte when he was eleven. Following graduation from Thomasboro High School he attended Brevard Junior College. One of the highlights of his early college years was entertaining and meeting Eleanor Roosevelt with the Brevard College choir. His time at Brevard, however, was interrupted in early 1945 by his service in the US Navy where he served as bugler and chaplain aboard USS Adirondack. Win earned his undergraduate degree from UNC in 1949. That year he enrolled in UNC’s Law School and married Virginia Rochelle, a union that would flourish over 72 years and produce five children, thirteen grandchildren and nine great grandchildren. Win earned an LLM (Master of Laws) degree from UNC in 1952; that year he and Virginia chose Charlotte as a place to hang Win’s shingle and raise a family. Win was a sole practitioner for sixteen years during which he also served as a solicitor (prosecutor) and later as Judge (1959-1968) of Mecklenburg County Recorders Court (now known as District Court). During that time he also served as a United States Commissioner (Magistrate) for the US District Court, Western District of North Carolina. Win’s sense of civic duty was evident in his service upon a multitude of local committees and commissions including a long tenure as a member of the Charlotte-Mecklenburg Planning Commission, which he also chaired. Win loved spending time at Ocean Isle Beach where he and Virginia entertained friends and family at their ocean-front beach cottage for several decades, beginning in 1959. In 1969 Win and Virginia moved to Lake Norman where they maintained a home for many years. Win retired from the practice of law in the late 1980’s when he and Virginia moved to Vero Beach, Florida where they resided until 2018. Very proud of his home state (all of Win’s ancestors were rooted in North Carolina well before statehood), he was drawn back to the Tar Heel State even while living in Florida, spending summers in their Blowing Rock mountain house, and finally returning to live in Davidson. Ever the gardener, wherever Win lived he loved growing and preserving an abundance of vegetables to share with family and friends. Burpee seed catalogs and canning supplies were never in short supply. A lifetime appreciation of music, diverse cuisines and cultures, a genuine love and respect of people and an unshakable sense of honesty create his enduring legacy to his family. Win was equally adept hosting large neighborhood cook-outs at Ocean Isle and Lake Norman as he was conducting contentious committee or H.O.A. meetings. In addition to his parents, Win was predeceased by his three brothers, William Jackson (“Jack”) Ervin, Rev. Joe Lane Ervin, and William (“Bill”) Gaston Ervin. He is survived by his wife, Virginia, his two sons, Winfred (“Fred”) R. Ervin, Jr. (I-Mei Chou Ervin) of Charlotte, Robert G. Ervin (Jan Galster Ervin) of Mooresville, and three daughters, Elizabeth R. Thomason (Dr. Michael Thomason) of Cornelius, Elaine E. Kerns (Robert Kerns) of Huntersville and Virginia (“Ginger”) W. Griffin (Larry Griffin, Jr.) of Cornelius; and grandchildren: Christopher Ervin and Neil Ervin of Charlotte, Blake Ervin (Robin) of Atlanta, Chad Ervin (Danielle) of Durham, Lauren Thomason of Raleigh, John Thomason of Durham, Leigh Hale (Sebastian) of Charlotte, Morgan Greer (Paul) of Huntersville, Erin Vazquez (Nelson) of Huntersville, Leah O’Conner (Michael) of Huntersville, Blair Dwyer (Timmy) of Wilmington, Larry (“Trey”) Griffin III of Charlotte and Haley Griffin of Charlotte; and great grandchildren (to date): Emma and Olivia Greer, Nathaniel, Regan and Caleb Ervin, Oliver and Charlotte Ervin, Eva and Zoe’ Vazquez. He is also survived by a multitude of beloved nieces and nephews. Funeral services will be held at James Funeral Home, 10520 Arahova Drive, Huntersville, NC 28078, at 2:00 pm on Sunday, April 10th. The family will receive friends at a reception at James Funeral Home immediately following the service. James Funeral Home of Huntersville is serving the family.

The family of Winfred Ervin created this Life Tributes page to make it easy to share your memories.

Send flowers to the Ervin family.