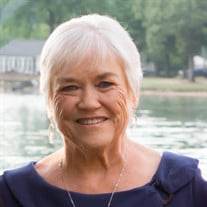 Brenda Scott, Of Huntersville, died Thursday, March 31, 2022, surrounded by her family after a yearlong battle with Myelofibrosis. Mrs. Scott was born in 1944 as Brenda Arlene Thomas, to parents Arlie and Elma Thomas. While attending high school at East Montgomery she met David Scott who attended a neighboring high school and shared mutual friends. In 1964 they married while she was attending Appalachian State University. During this time, she introduced her roommate and future sister-in-law, Mary Emma Blanchard, to her husband’s brother Aro Scott. Brenda graduated from Appalachian State University in 1966 with a Bachelor of Science degree in Education. She went on to work for 34 years as a teacher, starting in 1966 at Plaza Road Elementary, and spending the last two decades as a Kindergarten teacher at Long Creek Elementary. In the 1994-95 school year Brenda was recognized by WBTV’s “Thanks to Teachers” as one of two outstanding teachers in Mecklenburg County. The plaque features a poem titled “Why Are You A Teacher?” This poem ends with “you have more power than any president, more influence than any senator, more strength than any solider and an ability to care rivaled by the angels.” These words describe Brenda. Brenda had a strong faith and devoted much of her time to her community, and church, Mt. Zion United Methodist where she served on various committees and the administrative board. The youngest of three children Brenda is preceded in death by her eldest brother Bob Thomas. She is survived by her husband of 58 years David Scott, and their two children, Jeff Scott, Billie Kerr and her husband Jeff Kerr, her brother Bill Thomas, and her grandchildren Morgan Kerr, Jacob Kerr, and Landon Scott. A close family, Brenda is also mourned by her nieces and nephews, Arona Haywood, Deanna Mullis, Debbie Blessing, Danny Thomas, Brian Thomas, Mike Thomas, and Todd Thomas. In place of flowers, the family requests that donations be made to Mt. Zion United Methodist Church (Cornelius, NC) or St. Jude Children’s Research Hospital. A visitation will take place on April 4th from 6:00 pm to 8:00 pm at James Funeral Home located at 10520 Arahova Dr. in Huntersville, NC. James Funeral Home is owned by one of Brenda’s former Kindergarten students Sam James. The funeral service will take place April 5th starting at 11:00 am at Mt. Zion United Methodist Church in Cornelius, NC. Burial will follow in the church cemetery. James Funeral Home of Huntersville is serving the family.

Brenda Scott, Of Huntersville, died Thursday, March 31, 2022, surrounded by her family after a yearlong battle with Myelofibrosis. Mrs. Scott was born in 1944 as Brenda Arlene Thomas, to parents Arlie and Elma Thomas. While attending high... View Obituary & Service Information

The family of Brenda Scott created this Life Tributes page to make it easy to share your memories.

Send flowers to the Scott family.